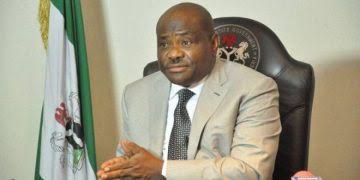 Rivers State Governor, Nyesom Wike has announced a 24-hour total lockdown and a dusk to dawn curfew in Port Harcourt and Obio/Akpor Local Government Areas as part of the State Government’s measures to check the spread of coronavirus.

In a broadcast earlier in the week, Governor Wike said the lockdown is until further notice.

He said on no account should there be any vehicular movements or gathering of more than two persons in these Local Government Areas, except those on essential services with appropriate authorization.

“All shops, trading or business activities, including currency exchange, in these Local Government Areas must also remain closed until further notice.

“All Landlords are advised to ensure that no shop or trading activity is opened or carried out in or around their premises or risk the confiscation of their property by the Government.

“Any person, group or institution that violates the lockdown and curfew in these Local Government Areas will be made to face the full wrath of the law. ”

The Rivers State Governor directed the immediate arrest and prosecution of Chief B.A. Worgu and Mr. Isaiah Abraka for sneakily organizing night markets in defiance of an existing ban on such activity.

Governor Wike said given the threat posed to the State by oil and gas company workers, it has reviewed all entry waivers and permits earlier granted to Oil and Gas Companies.

The governor sternly warned the Chief Medical Director of the University of Port Harcourt Teaching Hospital to stop politicalizing the issue of coronavirus in the State with what he called ‘his rascally, irresponsible and ill-motivated utterances.’

According to him, “This Government is focused and therefore will not allow itself to be distracted on its battle against COVID-19. However, we will neither tolerate nor hesitate to deal anyone who dares to fabricate lies to rubbish the hard work and sacrifice we are making to save the lives in our State just to advance parochial partisan interests.

“I wish to reiterate that the hard choices we have to make as a Government and as a people over the COVID-19 pandemic are all premised on upholding the sanctity of human life.”

The Rivers State Governor pointed out that the latest of these positive cases was the 14th case that was flown in to Port Harcourt by Bristow Helicopters from an offshore oilfield facility in Akwa Ibom State on the 29th of April 2020.

“These positive cases have shown and confirmed our fears that unvetted entry of Oil and Gas workers from Lagos, Abuja and elsewhere remains a potential source for the importation and spread of COVI/D-19 in our State.

“We have also observed with disappointment the persistent disobedience to the State Government’s lawful orders and or directives on COVID-19 by a number of communities and residents, especially in Obio/Akpor and Port Harcourt City Local Government Areas despite a repeated warning.

“On the whole, we can all see that COVID-19 cases confirmed across the country are growing in numbers, meaning that the situation in our state, although still relatively low, can change for the worse, if we relax our measures or become complacent.

“In view of the foregoing, Government has resolved to impose additional measures by the Executive Order, I have just signed, which are targeted at reinforcing our efforts toward stopping the spread of the virus in the State,” Wike said.