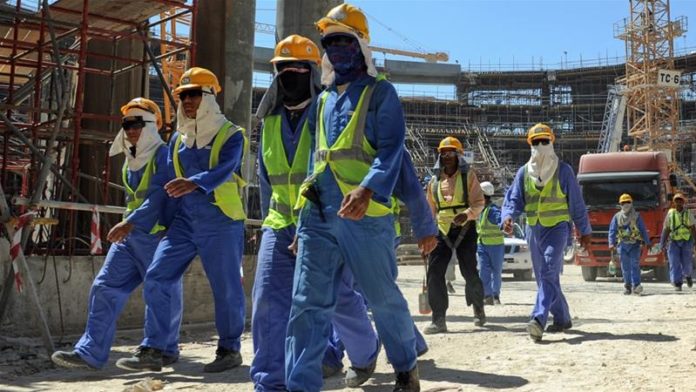 In a seeming frantic bid to end the kafala system and to mark a momentous step forward in upholding the rights of migrant workers, Qatar has announced sweeping reforms to its labour market.The Council of Ministers of the State of Qatar  on October 16 unanimously endorsed new legislation allowing workers to change employers freely.

Workers in Qatar had previously required a no-objection certificate (NOC) from their employer in order to do so.

A Ministerial Decree by the Minister of Interior was also signed, removing exit permit requirements for all workers, except military personnel. Together, these steps mark the end of kafala in the country.In addition, the Council of Ministers endorsed a new law to establish a non-discriminatory minimum wage, the first in the Middle-East.The International Labour Organisation (ILO) has already welcomed these reforms and recognises the commitment of the State of Qatar to transforming its labour market.

ILO Director-General, Guy Ryder, said ‘’these steps will greatly support the rights of migrant workers, while contributing to a more efficient and productive economy. I am pleased that the ongoing ILO technical cooperation programme in Qatar is tangibly contributing to the government’s effort to advance social justice and promote decent work in the country.’’The elimination of the NOC requirement will allow workers to freely change employers following an initial probationary period. Should they wish to change employers during this period, the new employer would need to reimburse recruitment costs to the original employer.

The decision on exit permits means that domestic workers; workers in government and public institutions; workers employed at sea and in agriculture; as well as casual workers are free to leave the country either temporarily or permanently without having to obtain the permission of their employers.

This covers all workers not covered by Law No. 13 of 2018, which removed the requirement to obtain exit permits for most workers covered by the Labour Law.Meanwhile, the establishment of a non-discriminatory minimum wage that applies to all nationalities and all sectors will guarantee a minimum level of protection for all workers. The minimum-wage level will be set later in the year, based on a joint study already completed by the ILO and the Ministry of Administrative Development, Labour and Social Affairs (ADLSA).General Secretary of the International Trade Union Confederation, Sharan Burrow, said ‘’Qatar is changing. The new tranche of laws will bring an end to kafala and put in place a modern industrial relations system. We recognise that a new evidence-based minimum wage rate will ensure dignity for migrant workers. We urge the government to announce this as quickly as possible. The partnership between the Qatar Government and the ILO, supported by the ITUC, is working to change lives.’’On his part, Roberto Suarez-Santos, Secretary-General of the International Organisation of Employers, said: ‘’we congratulate the Government of Qatar on the major steps they have taken to adapt their labour market standards. IOE is proud to have supported the government’s efforts over the past several years. I would like to express our appreciation to those leading this process for making decent work and sustainable economies a centrepiece of development in Qatar.’’The respective draft laws will now be referred to the Advisory (Shura) Council, and subsequently for the approval and signature of the Emir HH Sheikh Tamim bin Hamad Al Thani. The legislation is expected to come into force by January 2020.These reforms are however, part of the ILO-ADLSA cooperation agreement signed in 2017, which resulted in the opening of an ILO Project Office in Doha in April 2018