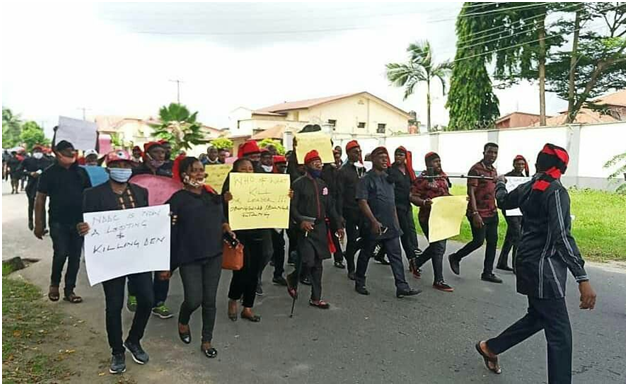 Eket, the second-largest city in Akwa Ibom State after Uyo, the state capital, erupted in a mass protest on Wednesday following the controversies around the sudden death of the Executive Director, Finance and Administration of the Niger Delta Development Commission (NDDC), Ibanga Bassey Etang.

The late NDDC chief was a former President-General of Afigh Iwaad Eket, an influential socio-cultural group in Eket, the base of the American oil giant, ExxonMobil.

Etang died last week Thursday in Port Harcourt, the Rivers State capital. The management of NDDC is, however, blaming his death on COVID-19, a claim that is not flying in some quarters.

Youths of Eket Federal Constituency, galvanised by Afigh Iwaad Eket protested the sudden demise of Etang, demanding that his death should not stall the process of auditing the Commission and investigating an alleged N40 billion Palliative Fund.

According to them, Etang may have been deliberately killed to cover up certain undercurrents related to the impending probe.

The youths took their protest to the Akwa Ibom office of NDDC. With placards, the protesters rued the inconsistencies from the NDDC which they said made Etang’s death a rather curious one for them.

No official of the commission from the Uyo office came out to address the youths, who requested independent machinery to thoroughly investigate the cause of the death of Elder Ibanga Etang.

Speaking through their President General, Godwin Williams, they wondered, “why Etang died just a few days to the probe of the NDDC by the National Assembly, especially after the Commission had, some weeks ago, admitted that the sensitive documents which would aid the probe were in the custody of the Executive Director for Finance and Administration?

They also expressed dismay that the NDDC was quick to link his death to the dreaded coronavirus, even when the National Centre for Disease Control (NCDC), the body authorised to make such declaration had not done so?

“The answers to the above rhetorical questions confirm that Etang’s sudden death is connected to the move by the National Assembly to audit NDDC’s account and to investigate the alleged misappropriation of the N40 billion palliative fund. It is obvious that our brother has been sacrificed on the altar and guise of forensic audit and investigation.

“Consequently, we, the Ekid people are extremely angered by the conspiracy that has led to the unfortunate death of our respected and very illustrious brother. His death is no doubt a monumental loss to Afigh Iwaad Ekid in particular, and Ekid nation in general.

“We value the life of every Ekid son/daughter; so, we will not accept or allow this rape on us to be swept under the carpet, especially now that we are aware that NDDC’s plan to eventually link Hon. Ibanga’s death to COVID-19 was thwarted by the public outcry against the intended foul play.

“On this strength, we pledge our commitment, as a pressure group who is pained by the loss of its former President-General, to keenly follow up the process of unravelling the real cause of his death. And this we will do as a mark of last respect and honour to our brother, ObongIwaad (Hon.) Ibanga Etang,” the youths said

They insisted that “the death of Etang, the Executive Director of Finance and Administration of the Interim Management Committee of NDDC should not stall the process of auditing the Commission and investigating the N40 billion Palliative Fund.”