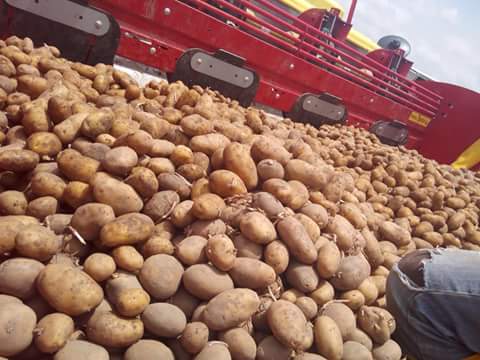 As a strategy to spur the minds of its citizens into potato farming for exportation, the Plateau State Government has distributed 500 Water Pumps out of 1500 procured, under the African Development Bank (AFDP)  Plateau State Potato Value Chain Project.

This according to the Plateau State Governor, Simon Bako Lalong is “the first phase”, while subsequent distributions to other zones will be carried out soon.

The governor stated this Wednesday, March 11, during the official launching and distribution of the pumps to farmers at the Plateau State Development Programme (PADP) Office, Dogon Dutse, Jos.

“We want to facilitate irrigation farming and increase the production of potatoes and other vegetables in the Southern  Zone, so are commencing this distribution today, with 500 water pumps which will be given to farmers across six Local Government Areas across zone”, Lalong said.

The Governor said this form of intervention has become necessary to address the challenges of potato farmers and transform the economic fortunes of its people, particularly farmers.

“Over the years, potato farmers had been contending with many challenges like lack of improved seeds, poor farming practices, limited inputs, potato diseases, lack of preservation and storage capacity and marketing among others”.

” But through the Potato Value Chain Support  Project, we are carrying out a wholistic transformation of potato farming to make farmers produce more with less cost and labour”.

The Governor charged the recipients to put the water pumps to judicious use because they will be held accountable.

In his opening remarks, the State Project Coordinator, of the AFDP assisted Potato Value Chain, Mr. Thomas Muopshin said “the distribution of the irrigation water pumps is among strategies that will feed the other activities of the Value Chain.

While commending the State Government for demonstrating its commitment through the payment of counterpart funds for the project, the State Coordinator said “Some of the infrastructures that have been put in place by the project include Hydraulic Structures, Water Harvesting Structures, and Wash Bores.

Among other infrastructures that have reached 90 percent completion, according to Muopshin is The Tissue Culture Laboratory, which upon completion will provide good quality seeds, high yielding, and disease-resistant varieties.

“These infrastructures will not only increase productivity and income to farmers but will also enhance revenue for the state in both local and foreign exchange”.

In his speech, the Plateau State Commissioner for Agriculture, Dr. Hosea Finangwai disclosed that due to good weather, Plateau state produces over 90 percent of potatoes in the country.

According to the Commissioner, “the potato value chain support project has not only brought an agricultural revolution to the state that will turn around its economic but will create rural transformation for the betterment of the rural populace”.