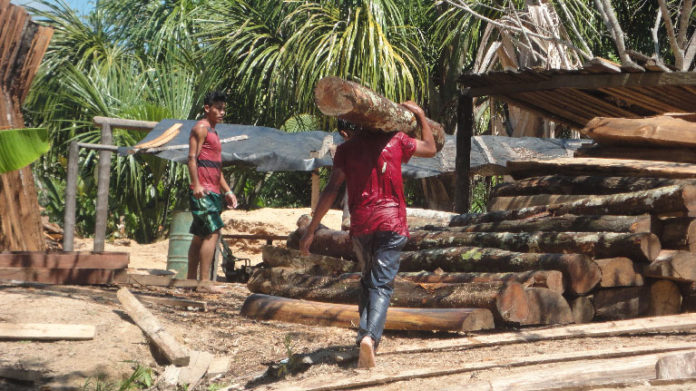 Peace judges in Peru’s Amazon region have joined the International Labour Organisation’s efforts to eradicate forced labour in the area.For decades, illegal logging has affected the region. It has not only had a devastating impact on the landscape and environment but has also blighted the lives of whole generations of mainly indigenous communities who have found themselves trapped in forced labour.Many of the loggers are recruited by labour intermediaries who trick them into debt bondage by offering wage advances, food and timber exchanges.

Before long, the workers become ensnared in a cycle of debt and servitude that is passed on from one generation to the next.As part of ILO’s Bridge Project, which supports efforts to combat forced labour, 130 justices of the peace have been trained in the high-risk districts in Ucayali, San Martin and Loreto in the Amazon region, as well as in Cusco and Puno in the highlands region.There are more than 5,800 peace judges in Peru.

As they are familiar with the problems of their neighbours, they are well placed to raise awareness of forced labour, especially in remote rural areas.Using guidelines drawn up by the project in collaboration with the National Office of Peace Justice and its local office in Ucayali, the trained peace judges will be able to identify cases of forced labour and take action to prevent and intervene in cases.“We know that justices of the peace get elected because of the good attitude we convey to the population. This helps to resolve conflicts and sanction irregular acts in the community. This also applies to cases of forced labour”, says Rudbel Gaspar, a justice of the peace in the district of Neshuya, Ucayali, in the central jungle of Peru.Leyla Shahuano, a Justice of the Peace in the district of Yarinacocha, also in Ucayali, says she now considers it part of her job to prevent forced labour and to identify what measures to take with victims of forced labour.

“Women are standing out, and are empowering themselves to make decisions in our Amazon communities. Preventing people from falling into forced labour is one of our tasks as Justices of the Peace, and for this, we need to work together with the municipal authorities in our villages”, she said.

Progress and challengesThe main objective of the Bridge Project, funded by the United States Department of Labour, is to fight against forced labour through interventions linked to prevention and the strengthening of public policy.Bridge Project Coordinator, Teresa Torres, says “although progress has been made in areas such as the criminalisation of forced labour, the strengthening of the regulatory framework of labour inspections, and the development of training programmes for justice operators, major challenges remain.“We hope that Peru will ratify ILO Protocol 2014 on forced labour, as this standard establishes measures focused on the prevention of cases, protection, access to justice and recovery of victims, and on addressing factors that increase the risk of forced labour.”