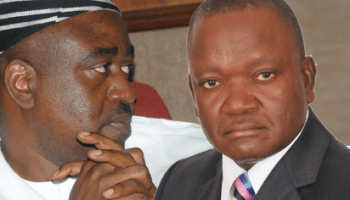 The Peoples Democratic Party has clarified that there was no truth in the rumours that Governor Samuel Ortom, Senator Gabriel Suswam and some other bigwigs of the party were planning to defect to All Progressives Congress. The party insisted that the claim was baseless and unfounded, stressing that those at the centre of the rumour were seeking attention.

State Chairman of the PDP, Mr. John Ngbede, who clarified Makurdi observed that the rumour became rife after the recent security meeting called by the governor which attracted stakeholders from across political party lines. According to Ngbede: “It was after the meeting that people started insinuating that the Governor, Senator Suswam and other stalwarts of the party, were planning to defect.

“But there is nothing like that; what took place were purely security meetings and everything that was discussed were security matters and nothing more. Moreover, we just did a follow up of the meeting yesterday, myself, the Deputy Governor and the Senator representing Benue South senatorial district. We met again to see how we can convene a similar meeting in our district to see how to tackle the security challenges in our various communities because it is becoming alarming and something needed to be done urgently.”