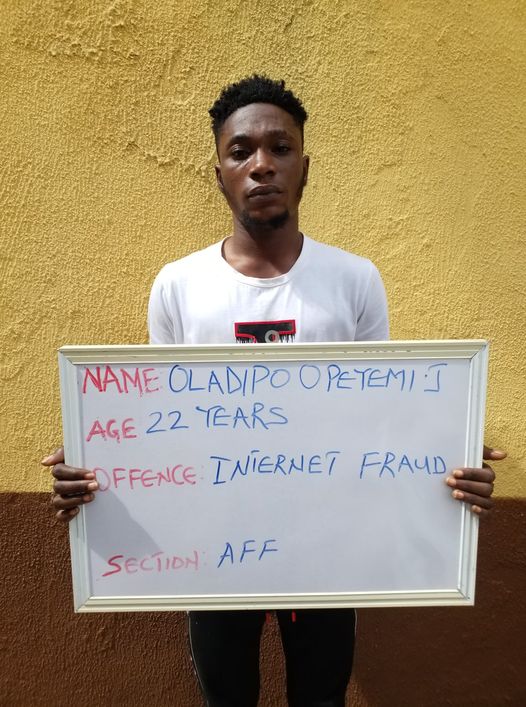 A 23 year-old HND 1 Student of the Federal Polytechnic, Offa, Kwara State, Oladipo Opeyemi Juwon was on Thursday sentenced to nine months imprisonment by Justice Mahmood Abdulgafar of the Kwara State High Court sitting in Ilorin over his involvement in internet scam.
The sentence followed his arraignment by the Ilorin Zonal Office of the Economic and Financial Crimes Commission, EFCC, on a three-count charge bordering on cheating and attempted to cheat contrary to and punishable under Section 324 of Penal Code Law of Kwara State.
Count one of the charges reads: “That you, Oladipo Opeyemi Juwon, sometime in the month of March 2019, in Ilorin, within the jurisdiction of this Honourable Court, did cheat by personation, by portraying yourself as a white female named Frank Tinna via your email address franktinna66@gmail.com to one Bernard Fontenot and induced him to send you the sum of $235 United States Dollars vide gift cards, a representation you knew to be false and thereby committed an offence contrary to Section 324 of the Penal Code and punishable under the same Section of the Law.”
Oladipo pleaded guilty to the charge when it was read to him.
Following his plea, Enoch Onyedikachi, an operative of the EFCC was called into the witness box to review the facts of the case.
Onyedikachi, while being led in evidence counsel to the EFCC, Andrew Akoja, told the court how the crime was perpetuated.
“On the 7th of September, 2020, the EFCC, Ilorin Zonal Office received anonymous petition from some concerned citizens in Offa about the activities of some internet fraudsters in the area. The Commission swiftly placed surveillance on the area. Consequently, on the 14th of September, we raided the place leading to the arrest of the defendant and other suspects. Upon arrest, we recovered an iPhone from the defendant.
“The defendant was brought to our Office on the 15th of September, 2020. We gave him a computer attestation form, which he filled. We analysed his phone and email address. Our findings revealed that the defendant was into internet fraud; a fact he admitted to in writing”.
In his judgment, Justice Abdulgafar said:
“I have considered the totality of the evidence placed before me; the plea of the defendant; the exhibits tendered; the uncontradicted and unchallenged testimonies of the sole prosecution witness, Enoch Onyedikachi, I hold the view that the prosecution has proved its case beyond reasonable doubts.”
The judge said further: “This court finds you, Oladipo Opeyemi Juwon guilty as charged. I hereby sentence you to three months imprisonment on count 1 with option of fine of N100,000 (one hundred thousand naira only). Three months imprisonment on count two with option of fine of N100,000 (one hundred thousand naira) and three months imprisonment on count three with N50,000 (fifty thousand naira) as option of fine”
According to the judge, the sentence would commence on the 23rd of December, 2020 in view of the ongoing examinations at the Federal Polytechnic, Offa, involving the convict.
The judge also ordered the convict to forfeit his mobile phones and restitute his victims.