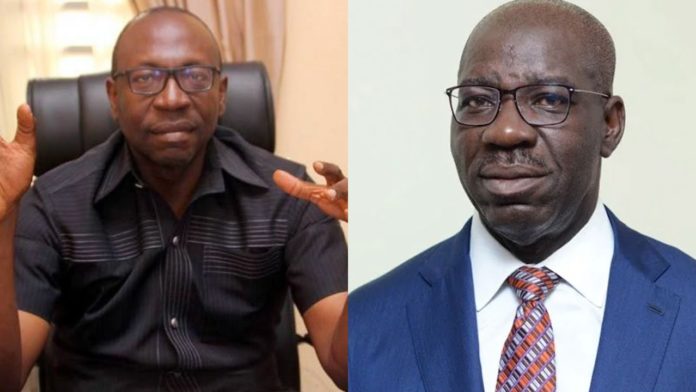 The All Progressives Congress governorship candidate in Edo State, Pastor Osagie Ize-Iyamu, has accused the state governor, Godwin Obaseki of bribing his way to emerge as the party’s flag bearer in the upcoming poll.

Ize-Iyamu alleged that Obaseki paid the PDP N15 billion to emerge as its governorship candidate.

He made the allegation in a statement signed by his campaign Director of Communications, John Mayaki.

The APC governorship candidate charged the state governor to explain to people of the state how he came about such a huge fund.

He also expressed optimism that he would defeat Obaseki at the poll on September 19.

“He is also yet to explain to the people of Edo State where he got the 15 billion Naira he paid the PDP tax-collectors to facilitate his imposition as the party’s emergency-hour candidate.”

“It is no surprise, given the nature of Obaseki’s administration and sharp practices of both governor and appointees that such an agency is missing in Edo State.”

Obaseki had emerged as PDP’s governorship candidate in Edo State after all aspirants stepped down for him.