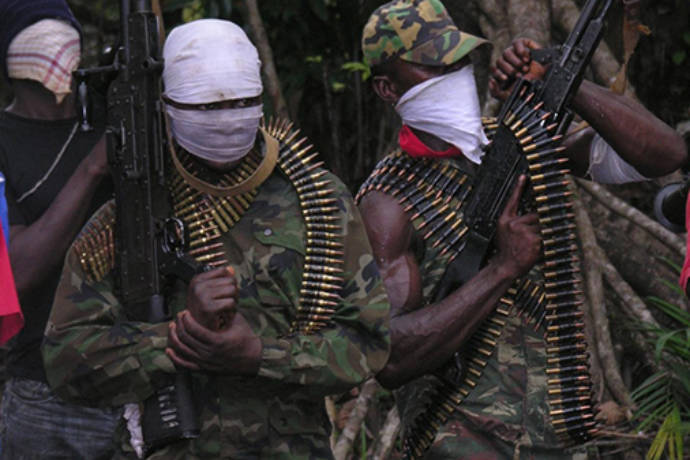 Piqued by the worrisome poor condition of living in Nigeria, militants of the Niger Delta, the country’s main oil and gas region, have threatened to further collapse oil revenue by renewing insurgency in the region in support of the ongoing protest against police brutality.

The aggrieved militants on the platform of Reformed Niger Delta Avengers (RNDA) say they will bomb major oil installations in the area and confront the armed security forces.

RNDA is also threatening to withdraw from the ceasefire pact with the Federal Government in order to engage troops attached to the proposed Operation Crocodile Smile, and resume attacks on some identified oil facilities in the region if issues of poor welfare, armed oppression and inequality in the standard of living between the citizens and political elites are not addressed.

Before this threat, Nigeria has been suffering from the collapse in oil prices due to the COVID-19 pandemic. A renewed Oil War in the creeks will plunge the country’s economy into a severe economic recession.

In its June report, World Bank Nigeria Development Update (NDU) warned of the worst economic recession in Nigeria since the 1980s. The report, Nigeria In Times of COVID-19: Laying Foundations for a Strong Recovery, estimates that Nigeria’s economy will likely contract by 3.2% this 2020.

This projection assumes that the spread of COVID-19 in Nigeria is contained by the third quarter of 2020. If the spread of the virus becomes more severe, the economy could contract further. Before COVID-19, the Nigerian economy was expected to grow by 2.1% in 2020, which means that the pandemic has led to a reduction in growth by more than five percentage points.

The macroeconomic impact of the COVID-19 pandemic will likely be significant, even if Nigeria manages to contain the spread of the virus. Oil represents more than 80% of Nigeria’s exports, 30% of its banking-sector credit, and 50% of the overall government revenue.

With the drop in oil prices, government revenues are expected to fall from an already low 8% of GDP in 2019 to a projected 5% in 2020. This comes at a time when fiscal resources are urgently needed to contain the COVID-19 outbreak and stimulate the economy.

The pandemic has also led to a fall in private investment due to greater uncertainty, and is expected to reduce remittances to Nigerian households, which in recent years have been larger than the combined amount of foreign direct investment and overseas development assistance.

World Bank Country Director for Nigeria, Shubham Chaudhuri, said “while the long-term economic impact of the global pandemic is uncertain, the effectiveness of the government’s response is important to determine the speed, quality, and sustainability of Nigeria’s economic recovery. Besides immediate efforts to contain the spread of COVID-19 and stimulate the economy, it will be even more urgent to address bottlenecks that hinder the productivity of the economy and job creation.”

The report shows that the human cost of COVID-19 could be high. Beyond the loss of life, the COVID-19 shock alone is projected to push about 5 million more Nigerians into poverty in 2020. While before the pandemic, the number of poor Nigerians was expected to increase by about 2 million largely due to population growth, the number would now increase by 7 million – with a poverty rate projected to rise from 40.1% in 2019 to 42.5% in 2020.

The report notes that the pandemic is likely to disproportionately affect the poorest and most vulnerable, in particular women. School closures have reduced the food intake of almost 7 million children who are enrolled in the national school feeding program.

Economic activities have been disrupted and women’s livelihoods have been particularly impacted. Over 40% of Nigerians employed in non-farm enterprises reported a loss of income in April-May 2020. In addition, the fall in remittances is likely to affect household consumption because half of Nigerians live in remittance-receiving households, of which about a third are poor.

“The unprecedented crisis requires an equally unprecedented policy response from the entire Nigerian public sector, in collaboration with the private sector, to save lives, protect livelihoods, and lay the foundations for a strong economic recovery,” said Marco Hernandez, World Bank Lead Economist for Nigeria and co-author of the report.

The Buhari administration took some important health, fiscal and monetary measures to contain the outbreak, moderate the recessionary pressures and start mitigating the effects of the economic shock.

Besides the assessment of the economic situation, this edition of the Nigeria Development Update discusses the impacts of the 2019 land border closure; the opportunity to promote agribusiness for food security and job creation; and options to leverage emigration, remittances, and the diaspora for development.

However, RNDA in a statement on Monday argued that its decision to support the protesting youths was based on the open inequality in the distribution of wealth and development in the country.

“We, the agitating militant groups in the creeks are lending our voice to the demands of our great resilience Nigerian youths based on the fact that Nigeria is a blessed nation full of abundance of so much untapped natural resources, wherefore we demand for a better Nigeria that the welfare of the citizens should be serious taken into account”, the group says.

The militants claimed that at an emergency meeting in Delta State presided over by their leader, John Mark Ezon Ebi also known as OBAMA, they resolved to take some radical actions to knock sense into Abuja.

They are demanding that regional blocs be entitled 10 per cent of revenues accruing to the country from all economic sources to cater for the welfare of the citizens before the revenue will be shared to the three levels of governance.

“The oil-producing communities will get five per cent front line charge from the oil revenue and will be directly paid to the host communities and not to the governors of the Niger Delta states”, they add.

Continuing, they said, ”we want to put it on record that President Muhammadu Buhari is not to blame entirely for what is happening, but we blame some ministers handling sensitive areas of the economy and the National Assembly members.

“While the citizens are making sacrifices in the areas of adjusting to harsh economic policies of the government, the aides of President Buhari and members of the National Assembly are living large in opulence. Even the members of RNDA made sacrifices to agree to a ceasefire in 2016 in order to allow the President Buhari to consolidate on his policy of anti-corruption, economic growth, job creation and massive infrastructural development of the Niger Delta.

‘’But, members of the National Assembly and politicians are pushing the people to the wall, and we are ready to fight back”, warning that the leadership of RNDA has directed its striking force unit commanders in all formations to be on standby.

According to RNDA, ”we may resume bombing and heavy destruction of major crude oil pipelines and their platforms including the major gas distribution pipelines from Escravos linking to Warri-Kaduna and Lagos.

“Also targeted are major pipelines including the Chevron Valve Platform located at Abiteye under Warri-South local government area of Delta state and this is one of Chevron major platform most significant platform and it serves as a connecting point where all other Chevron Niger Delta platforms link up, and shell underwater Forcardos 48-inch Export pipeline wish connect from clough creek through river Ramos creek delivery line to the Forcardos terminal wish is a major and one of the Nigeria highest crude delivery pipeline will be brought down, the major Escravos trans Lagos pipeline linking Warri to Lagos.”

“Also, major gas pipeline that supplies both Lagos and Abuja with constant electricity supply will be cut off, and other several gas and oil pipelines belonging to the NNPC located near Warri within the hinterland will also be blown up, the major chevron main electricity feedback pipelines located at the Escravos tank farm at Ciera creek will not be left out in this well-coordinated attack the major one of the highest crude oil-producing wells owned by Chevron which are RMP23 and RMP24 all located near Dibi in Delta state and it contributes majorly to the daily crude oil production chain of the country will all be blown up and cut to zero level and the Bunny Nembe creek trunk pipeline that located at Bonny Export terminal line will not be left out”.