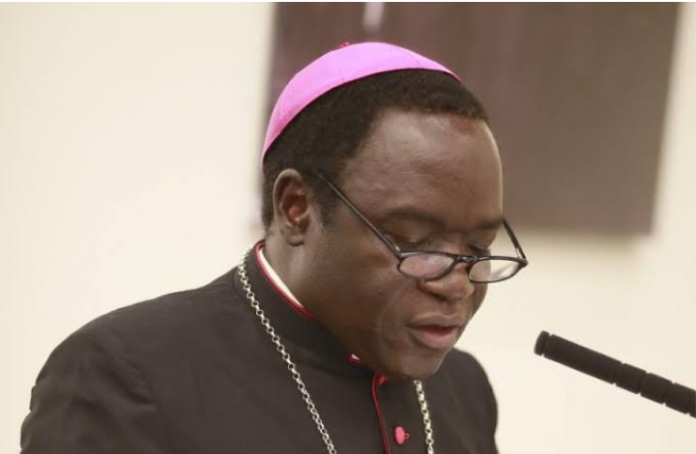 The call was made by the director of MURIC, Professor Ishaq Akintola, in a press statement issued on Wednesday.

“It will be recalled that Bishop Mathew Hasan Kukah of the Sokoto Diocese indirectly called for a coup and referred to Islam as a violent religion about four days ago. We strongly believe that those pronouncements are inconsistent with the bishop’s status particularly as the secretary of Nigeria’s Peace Committee.

“How did such a belligerent combatant emerge as the secretary of Nigeria’s Peace Committee? What good can come from a man who is filled with hate and bias for a large section of the country? He calls for a coup against a democratically elected government. He stigmatized Islam as a violent religion. He derides the North. We demand that Kukah should honourably recuse himself from the Peace Committee. Failure to do so will have a devastating effect of discrediting that committee. It will mean that the committee was set up in the first place for a partisan purpose.

“This is because many see Bishop Kukah as the de facto leader of the Committee. The Peace Committee must clarify some issues surrounding its formation and modus operandi. Whose idea was the whole thing from the beginning? Where is the committee’s secretariat? Is it true that the whole committee was Kukah’s initiative ab initio? Is it also true that its secretariat is headed and managed by the director of the Kukah Center? If that is so, General Abdulsalam must have been persuaded to come on board and serve as the chairman just to give legitimacy and credibility to the idea.

“This Peace Committee has a credibility crisis on its hands unless it can remove Kukah as secretary and as a member if the bishop fails to recuse himself. Nigerian Muslims no longer have any confidence in the Peace Committee. It may as well disband while the members go home to sleep.

“This is the honourable thing for the Bishop of Sokoto Diocese to do in view of the humongous allegation levelled against him. A national peace committee needs wide acceptance from the general populace in order to function effectively. Unfortunately this does not appear to be the true situation on ground at present.

“There is no gainsaying the fact that the secretary of any organization is its livewire. He keeps their records and writes their reports. A man who is heavily biased against one faith cannot be trusted to prepare a fair report on interfaith issues. That position is too sensitive to be left in the office of a firebrand missionary known for his emotional outbursts.

“The silence of the Peace Committee since the Kukah controversy began is also disturbing. A peace committee whose secretary comes out with blazing guns firing from all cylinders at a section of the country and calls for a coup while its members keep mute gives cause for concern. It gives the impression that the secretary is holding members of the committee to ransom. He calls the shots. Afterall, any statement to be issued by the committee, ceteris paribus, is expected to be prepared by the same secretary. Here comes the hard nut.

“Nigerian Muslims have no confidence in the Peace Committee as long as Kukah remains its secretary and member. He has failed to remain neutral. His bias against Muslims has been openly displayed. Rev. Fr. Kukah should recuse himself, otherwise the committee has to disband.

“This has become necessary in view of the jaundiced position taken by the Catholic mission yesterday in an official statement. Nigerian Catholics declared their full backing of the preposterous pronouncements of Bishop Kukah. In that situation, it is no longer acceptable to leave the destiny of the Peace Committee in the hands of the Catholic Bishop.

“The question must be asked: who is the secretary of the Peace Committee? Kukah or the Catholic Diocese? A situation whereby Kukah issues a highly combustible statement and the Nigerian Catholic Mission backs him calls for caution.

“MURIC suggests immediate review of the composition and operation of the Peace Committee. The secretariat of the Peace Committee must be moved out of the Kukah Centre. A neutral place must be found. In addition, a neutral person who is not head or official of any religious group or a person known for making volatile statements must be made head of its secretariat. The Peace Committee may also consider coopting a co-chairman who must be a Christian since the current chairman is a Muslim. This will engender balance.

“We call on the Chairman and members of the Peace Committee to take these suggestions seriously in order to retain the respect it currently enjoys. A stitch in time saves nine. Immediate consultations and proper advice will save the committee from any embarrassment in future.”