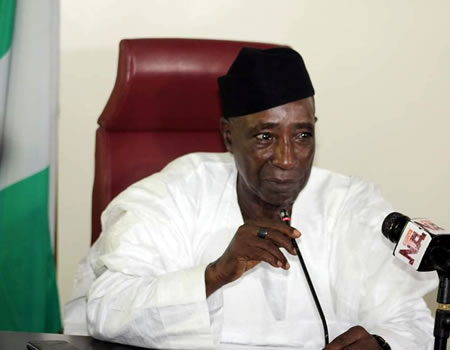 The Minister of Agriculture and Rural Development, Mohammed Nanono, has come under fire for saying there is no hunger in the land in the face of escalating food scarcity and high cost of available foodstuff.

The minister had said there is no hunger in Nigeria and the nation has enough food to feed itself.

Nanono, who disclosed this while addressing journalists on the occasion of the World Food Day in Abuja, said he is always amused when he hears people complaining of hunger in Nigeria.

“I think we are producing enough to feed ourselves. I think there is no hunger in Nigeria; there could be inconveniences. When people talk about hunger in this country, I just laugh because they don’t know hunger.

“You need to go to some other countries to know what hunger is.

“If you say I miss my breakfast and I get lunch and dinner, then that is all right… part of the problem of overweight is not necessarily the issue of a balanced diet, but some of us stay put without knowing that Nigeria used to be a former zone for migration in sub-Sahara Africa,” he said.

But reacting, one Mr Yahaya Mohammed said, “How can government officials know there is hunger in the land when they and their families depend fully on government resources and never go to Nigerian markets?

“How can he say such when a 50kg of rice is now being sold for N23,000 in Abuja and its environs and N26,000 in Lagos area? Even the locally packaged ones with stones and unmilled seeds is being sold for as high as N18,000. In climes with responsible government, he should be fired from his position.

“During the Goodluck Jonathan administration, the bag of rice now being sold for N23,000 cost N8,000 or N10,000 at most. You won’t know your mother’s delicacy tastes better until you taste from another woman’s pot. We now know which administration is better between the PDP and the APC.”

On his part, a public affairs analyst, Mr Johnson Ekundayo said, “the man must be cracking an expensive joke. But we are not surprised or what else do you expect when Mr President has directed his ministers to report to an aide who would in turn report to him?

“We called the Jonathan administration clueless and opted for a new government but have we got it right? We should apologise to the former President. This even serves us right as those who often go to the Beer Parlour and spend N5,000 on bottles would now have a rethink before spending a penny.”