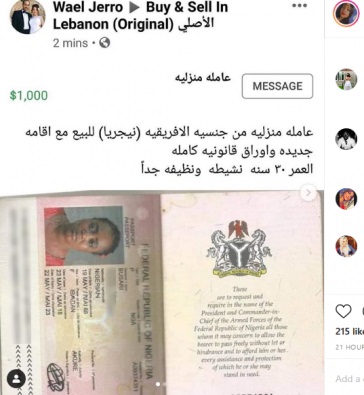 A Syrian national based in Lebanon has been arrested for allegedly putting up a Nigerian maid for sale.

The Facebook advert caused an uproar on social media after it was spotted by Nigerians.

Some people took a screengrab of the advert before it was deleted.

The Nigerian embassy in Lebanon was alerted and contacted the country’s Ministry of Labour about the matter.

“As a result of investigations, the man who posted the advert was arrested. He is a Syrian national (Wael Jerro), and he is being interrogated by the judicial body concerned,” the Lebanese General Security Directorate said in a statement.

The statement also warned anyone who employed foreign nationals in Lebanon not to advertise workers for sale.

“This falls under human trafficking, and thus makes the publisher subject to persecution,” it said.

Last year, an undercover BBC News Arabic investigation in Kuwait found that domestic workers were being illegally bought and sold online in a booming black market.