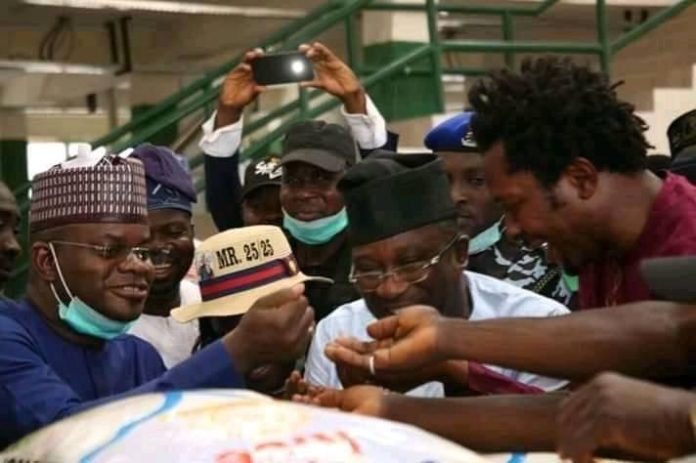 About a year after Governor Yahaya Bello of Kogi State assumed office, he launched the Agricultural Revolution Programme (ARP) as a move towards the actualization of his plan to revolutionize agriculture in the state. This was with a view to making Kogi self-sufficient in food production, boosting its income generation as well creating employment opportunities for the people, particularly the teeming youths.

Bello’s agricultural revolution drive was patterned after the agricultural policy of the President Muhammed Buhari-led Federal Government, aimed at shifting the country’s economy from its monolithic oil-based status to a more plural one with the agric sector playing the lead role.

Speaking at a meeting with agric investors, the Kogi governor had stated in categorical terms that “Agriculture is the main stay of the economy and the oil well of Kogi State. Making agriculture a business concern and not just farming for farming sake is one of the most important priorities of my government. The policy thrust of the administration on agriculture is to produce food and ensure food security for the people of the state, its neighboring states and Nigeria at large.”

At an interactive session with a group of young entrepreneurs in the state, Bello whose agricultural policy is said to be creating “a new circle of millionaires” remarked: “Our administration has deliberately focused on agriculture to provide food, jobs and security. As a young man, I know the limitless potentials in the youth. When they have the opportunities to deploy their energies to positive ventures, they are unstoppable. They have shown that in Kogi State… The Omi Dam Agricultural Project and the Osara Green House have saved the youth from the throes of criminality as they now practice highly rewarding agriculture. Kogi is the next big thing to happen. We have made tremendous progress in agriculture and we are proud of our achievements. Our government has shown what good governance can achieve with the energies and ingenuity of the youth.

“Osara and Omi have combined to give us amazing opportunities to place agriculture on the front burners of our economic renaissance. We are already a model for others to emulate. Let me use this opportunity to thank Mr. President for his leadership and drive in the agricultural sector. Nigeria is moving away from oil-dependent to agriculture – driven economy.”

In pursuit of Bello’s goal to transform Kogi from a civil service state to a commercially viable state via agriculture, the Kogi State Government through the Agricultural Development Project, ADP, held its maiden Agricultural Summit in November 2017.  The summit which had as its theme, “Agriculture: Investment Opportunities” was used to launch the Fair Agric Project (FAP). The FAP which is the implementation vehicle of the governor’s vision for agriculture is designed to create agricultural villages or settlements. According to the former Managing Director of ADP, Oyisi Okatah, “Fair Agric Villages are villages that shall supply the entire value chain for agriculture which includes supply of inputs crop production, livestock, fisheries, infrastructure, technology, processing, marketing, credit system and for export.”

Following the summit and others held thereafter which were believed to have served as eye-opener revealing the potentials of the state to the outside world, a team from a Netherlands firm, Dutch African Agricultural Projects came to Kogi in November 2018 to declare their intention to invest the sum of N144billion ($400million) in various Agro-allied products. Coordinator of the Project, Bert DeJong, had disclosed when they met with Bello that they were in the state to invest in dairy ranch programme, milk production, onions, sesame seed, rice, et cetera.

DeJong promised that the company will be mostly concerned about the needs of the host communities, while noting that 30 per cent of returns from the project will be invested into social projects that would add value to the lives of the community members. According to him, the project has the capacity to create 12,000 direct jobs for the people of Kogi State and another 25,000 to 30,000 indirect employments for the citizens. Bello said the firm’s vision in the area of agricultural investment is in line with Kogi government’s agricultural revolution, declaring that he will give full support to the team to make the project a reality.

The governor has been highly rated for his performance in the area of agriculture as he is believed to be living up to his words by working hard to turn Kogi into one of the country’s agricultural hubs.

The World Bank in June this year commended Bello’s administration for introducing sustainable agricultural programme in Kogi State. A team from the World Bank gave the commendation during an inspection tour to the site of Kogi Agricultural Initiative fish ponds at Geregu village in Ajaokuta local government area of the state. They observed that the programme will enhance Kogi economy, minimize unemployment and bring about poverty reduction among the youth population.

Some of Bello’s major achievements in the agricultural sector reportedly include N1 billion Naira investment on production of cassava, rice, cashew and other staple crops across 21 Local Government Areas; procurement of large number of agricultural machinery and equipment; massive investment on land clearing of thousands of hectares of land to address the constraints on land development; investment in rural network of roads to assist in evacuation of agricultural produce; acquisition of 10000 hectares of land in Ocharu for palm oil production; establishment of rice stable crop processing zone in Idah, Ibaji, Omi coupled with the rice farms in Bassa, Kotonkarfe, Lokoja and Idah. Also, a lot of rural farmers have been empowered through the anchor borrower scheme targeted at the youths and over 100,000 metric tons of fertilizer distributed freely to farmers across the state.

As part of its ongoing agricultural revolution, Kogi government is to empower over 500,000 cassava farmers in collaboration with the Central Bank of Nigeria (CBN). This was disclosed by the governor represented by the State Commissioner for Agriculture, Kehinde Oloruntoba, at a Stakeholders Consultative Meeting on the 2020 Agriculture Budget organized by ActionAid Nigeria, Oxfam Nigeria, ECOWAS Commission, CAADP Non State Actors Coalition and Federal Ministry of Budget and National Planning in July 2019.

The recent inspection of the completed over N4 billion Rice Mill factory at Omi Dam in Ejiba, Yagba West Local Government Area (LGA) by Bello has further demonstrated Bello’s commitment towards transforming the state through agricultural innovations. According to the governor, the brand new rice factory which has the capacity to produce 50 tonnes of rice per day is second to none in the northern Nigeria.

The Director General of Kogi State All Progressives Congress (APC) Campaign Council, Senator Smart Adeyemi, believes that the steps taken so far by Bello to make Kogi a top rice-producing state in the country were laudable. The former lawmaker from the western senatorial district, where the rice mill is located, had said that the project would go a long way to improve the economy of the state in particular and the country at large.

His words: “Kogi State had declared a state of emergency in the agricultural sector long before the unstable revenue generation in the state. The visionary administration of Alhaji Yahaya Bello has placed agriculture on the front burner of its economic prosperity plan known as the New Direction Agenda. A massive revolution is going on across the state in the area of rice production. The Omi Dam rice project is breathing down on the leading rice producers in the country.”

A Lokoja-based businessman and chieftain of APC, Hon. Fancy Jimoh Tiamiyu, hailed the efforts of the governor towards revolutionizing the agricultural sector in the state. Tiamiyu, the Director-General for Kogi LGA APC Bello-Onoja campaign organization, described the project as remarkably significant and an indication of the governor’s unflinching determination to reposition Kogi State for greater heights in the interest of the people.

He said: “The newly constructed N4 billion worth rice mill factory by the Governor Yahaya Bello-led Kogi State Government, which has the capacity to produce over 1000 bags of 50kg of high quality rice per day and could employ over 5000 persons in direct jobs and engage additional people in indirect employment, is a clear indication of Governor Bello’s strong commitment to building a better Kogi for all. It is a very outstanding and significant project capable of turning around the fortunes of Kogi State. As revealed by our performing governor, this is a project that will inject over N300 million every month into the economy of Kogi State and further boost the monthly IGR of the state with over N120 million. The Omi Dam in the rice mill has about 600 fish ponds from where fish and poultry meals will also be produced. The governor has demonstrated that he means well for Kogi State and he is leaving no stone unturned to transform the agricultural sector to create jobs for our people.”

Continuing, Tiamiyu added: “With the various programmes and projects he has embarked upon in the area of agriculture, no doubt, it can be evidently seen that Bello is working assiduously to keep to his promise to make agriculture a business concern and ensure that Kogi State becomes one of the agricultural hub of the country. Look at the setting up of the mass cassava production and Ethanol processing company. The bio ethanol plant would generate about $80 million annually and create jobs for over 200,000 youths. The Kogi State government last year signed an MoU with the NNPC to build a bio fuel refinery in Kogi. This will create jobs for over two million Nigerians and greatly reduce unemployment. Bello’s various interventions paved way for the availability of fertilizer, seedlings and other agricultural inputs to famers at reduced prices, thereby enhancing the production capacity of farmers in the state. This is why Governor Bello needs to be re-elected to enable him continue with the good work he is doing to transform Kogi State through agriculture and other developmental strides.”