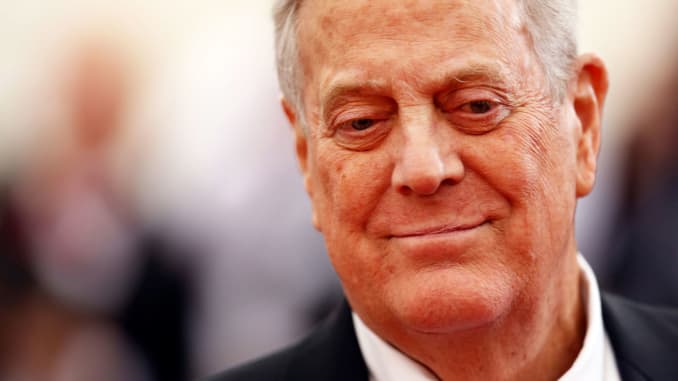 One of the brothers Koch, David, has shuffled off this mortal coil, and the pious few looking at his passing may well think he is making it tough for camels passing through needles.  As part of the Brothers Koch, he presided over a corporate empire that did its pinching best to wrest control from the purses of public accountability in the US republic.  At his death, he was the eleventh richest person on the planet, on par with his dominant brother, Charles.

David K, however, went beyond the narrower spending interests of brother Charles, the one with the sharpest of eyes for business who elevated the family’s Wichita oil company into a mammoth entity worth $110 billion.

The pet projects of right wing think tanks and campaign funding for libertarian causes did interest David, but he wished for more. Medicine and the arts tickled his interest, turning him into a philanthropist.  His particular funding-from-high approach was something that was bound to earn praise in some cases: the powerful can be benevolent to the arts and various good causes, even if it comes with a presumption of innate inequality.  Take the New York ballet, which can count some $100 million in donations from the family, and such institutions as the Memorial Sloan Kettering Cancer Center and the Metropolitan Museum of Art.

Such recipients spent little time philosophising about the origins of the loot.  As President Theodore Roosevelt said dismissively of John D. Rockefeller’s establishment of a foundation to manage and disseminate his wealth, “No amount of charities in spending such fortunes can compensate in any way for the misconduct in acquiring them.”

It was precisely such gestures that made David Koch a difficult one to pin down, at least for a certain breed of conservative.  Kevin D. Williamson of the National Review, for instance, has suggested that this particular Koch brother could not be meaningfully slotted into a niche of blue-blood conservatism, being himself “a supporter of gay rights, abortion rights, drug legalisation, and much else that does not fit very comfortably on the current ‘right wing’ agenda”.

Politics generates its own distinct tics; Charles and David were left heavy with the anti-socialist sentiments of their bruising father, Fred, who supervised the building of refineries in a Soviet Union hungry for petroleum engineering.  This was a temporary measure: when the Soviets felt competent enough to proceed without his help, Fred Koch wound his disgruntled way to a more accommodating Nazi Germany, where his firm, Winkler-Koch, prospered from 1934.  (This latter point is not mentioned on the website of an organisation Fred joined as an early national council member, The John Birch Society.)

A form of natural selection in the family was encouraged, with Charles edging David out in the pecking order.  David would find his way.  MIT engineering, basketball for which he showed more than an aptitude for, and presidency of Koch Engineering, and executive vice-president of Koch Industries in 1981.  While brother Charles always took primary polling in building the empire, turning Fred’s bricks into family marble, it was David who proved a consistent ally in subsequent family disputes, notably against mischievous brother Bill.

To study the Kochs is to study the US republic as an ailing patient saddled with profound neuroses.  To that end, few studies on the Kochs, or any other US corporation, match Christopher Leonard’s Kochland: The Secret History of Koch Industries and Corporate Power in America.  “The Koch brothers derived their wealth through a patient, long-term strategy of seizing opportunities in complex and often opaque corners of the economic system.”  That toenail growing patience was underpinned by an ideological observance of free-market economy, specifically those of the Austrian school.  Out of this worship of Ludwig von Mises and Friedrich Hayek came Market-Based Management, not much short of a cult’s affirmation.

The name Koch is associated with the realisation of political platforms and the disruption of others.  The same year David found himself running as vice-president, Richard Fink, long considered the steering force of the “Kochtopus”, suggested a three stage process in the field of activism. The idea would be germinated by intellectual hothouses and allowed to flourish.  Selected think tanks would treat these ideas as a convertible and exportable commodity: the activists and advocacy groups, suitably bankrolled with Koch cash, would fashion such raw material, using it to pressure elected officials.

As Jane Mayer, a keen student of the Koch phenomenon has noted, the brothers “built a kind of an assembly line to manufacture political change.” In Dark Money, she would call it “a libertarian production line, waiting only to be bought, assembled and switched on.”  Some conservatives preferred to simply see such operating means with gushing envy: the Kochs, according to an admiring Jim Geraghty, were engaged in “effective activism”, targeting “state legislatures, local tax initiatives and the political races that aren’t ‘sexy’.”

That production line had its favourite targets: the supposedly galloping away power of the state (by the end of the 1970s, abolishing the Energy Department had become a platform of the Libertarian Party), unwanted regulations, and fetters on corporate behaviour. In recent years, a clearer picture of the Koch contribution to a big ticket issue – climate change denial – has emerged.  This has been characterised by an insatiable, and uninterrupted hunger, for natural resources.  As David Koch explained to the Society of Petroleum Engineers in Alaska in 1980, the US, “in its own self-interest should be actively promoting development of natural resources in Alaska and assisting in placing more land in private ownership.”  Good for Koch; good for the United States.

In 1991, a coterie of individuals who have become part of the usual suspect list of climate change scepticism, underpinned by the need for continued environmental exploitation, gathered at a Cato conference titled “Global Environmental Crisis: Science or Politics?”  The theme was clear enough: plunder as there was no danger of perishing; extract as they was no fear of environmental degradation.  Meteorologist Richard S. Lindzen was a headline act, dismissing global warming as having “very little evidence at all”.  According to Kert Davies, director of the Climate Investigation Center, such gatherings proved indispensable in stifling any chances of a carbon tax.

In 1980, David Koch attempted a foray into US politics, an effort to come from behind the screen of power. In a sense, it seemed to contradict the secrecy and opacity of the Koch modus operandi: to influence US politics was to do so in the foggy background of assiduously gathered intelligence, targeted donations and backroom manipulations.   Running as US vice-presidential candidate for the Libertarian Party, with Ed Clark as the mainstay, did not come to much: the brothers ultimately knew that their mark would be best made as puppet masters rather than openly elected puppets. Inequality, smoothed by various disgorges of largesse, would always be key.

Perhaps unwittingly, the statement from the family on David’s passing suggested the triumph of a certain type of raw American value, distant, unattainable, and ultimately hostile to the commonweal.  Life is nasty, brutish and short, but it has the softening of moneyed self-interest.  “David liked to say that a combination of brilliant doctors, state-of-the-art medications and his own stubbornness kept the cancer at bay.”  How good of him, and his family, to embrace a view of the evils of state-sponsored health care and welfare; to the rich go the lecturing spoils.

Rudy Giuliani, former New York mayor and semantic gymnast for President Donald Trump, was keen to do his bit of weeding of negative opinions.  “David Koch,” he peevishly tweeted at Senator Sheldon Whitehouse of Rhode Island, “was a good man who had a different ideology than you or to some extent me.  But it’s cruel to attack a dead man who was doing what he believed was best for our country.  Stop demonizing.”

The case here is less one of demonization than sorrow.  The success of Koch Industries, and even taking into account David’s calculatingly philanthropic streak, has signalled a failure, and failing, of the US republic.  The citizen has been anatomised; the corporation reigns with impunity.  Charles, and his philosophy, remains ascendant.