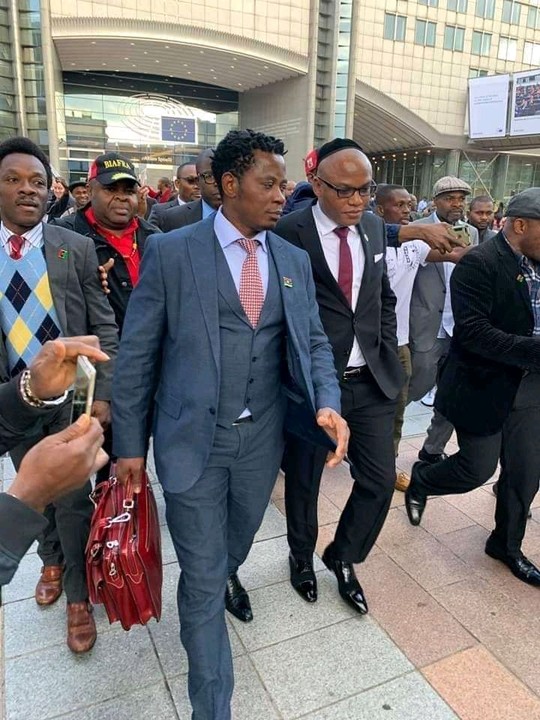 Over 1,400 people have been killed within a period of six months in Nigeria as a result of kidnapping and banditry, the United Nations (UN) said on Tuesday just as Biafra agitators stormed the European Union (EU) Parliament to lobby for Europe’s support for their quest for a Sovereign State of Biafra out of Nigeria.

Leader of the Indigenous People of Biafra (IPOB), Nnamdi Kanu, said that it was the ill treatment meted by the All Progressive Congress (APC) administration of President Muhammadu Buhari that aggravated the situation that worsened the agitation for Biafra.

In a paper he presented to the EU Parliament, Kanu said that ‘’after the Nigerian Civil war, Biafrans slowly rebuilt their world, but as far as Nigeria was concerned, they were not and never had been Biafrans, they were Nigerians from South-East or Igbo-speaking Nigerians.

‘’The Biafran war was airbrushed out of the Nigerian consciousness. Biafrans could only whisper about their loss. Joining the global Biafran diaspora was one option for those who could get out of the country; other remained in Biafra land, their Biafran identity amongst themselves, undiminished.

‘’Nigeria leaders particularly the present administration of Buhari continues to prioritize crushing assertions of Biafra identity has been the order of the day as even peacefully commemorating the war risks arrest, detention prohibited ill treatment or being shot”

‘’In recent years the Nigerian state authorities have conducted three orchestrated campaigns against Biafrans, and the three Operation Python Dance military operations have been battles targeted against the Biafrans, the first being in 2016 and the second in 2017 and the third that is ongoing, all designed to undermine calls for Biafra self determination.

‘’Operation Python Dance campaigns are laden with intimidation, serious and systemic human rights violations carried out by the state with impunity, and IPOB which is a voice for Biafrans for self determination, a non violent group being always targeted for destruction. It is the determination of the IPOB to ensure self determination by calling for referendum that the Buhari led Nigerian government decided to brand it as a terrorist organisation, a proclamation the EU, the United Kingdom and United States of America have all rejected.’’

Continuing, the IPOB leader said, ‘’Nigeria is the problem not the solution, adding that Nigeria has always been a fiction because it was created for British administrative and colonial continence in 1914, having drawn together alleged desperate people into one entity’’, pointing out that Biafrans do not speak the same language, as many speak Igbo, and others speak Urhobo-Isoko, Ijaw-Epie-Ogbia, Ogoni, Efik, Annang, Eket, Oron-Ibibio, Ogoja, Ejagham, Igala, Idoma Ibani and Igbanke among others.

According to IPOB, Biafraland is made up of Rivers, Cross River, Akwa Ibom, Ebonyi, Imo, Anambra, Abia, Enugu, Bayelsa, and Delta and the Fulani herdsmen have shown interest in the provinces from the central belt of Biafra such as Enugu, alleging that the Biafra persecution started with the Independence as one colonial master was replaced by another and without endorsing British rule, Biafran fared better under the British than they have under Nigerian dominance.

On killings in Nigeria, the UN Country Director, Edward Kallon, however disclosed this in Makurdi, the Benue state capital at a meeting with Governor Samuel Ortom, where he noted that killings by armed herdsmen and bandits outweigh killings by the Book Haram terrorist in the country.

‘’Pockets of conflicts and insecurity in the country at large especially where I am today (Benue), the herders and farmers crisis and also kidnapping and banditry is now really getting out of hand. The last statistics I saw from the government was that over 1,400 people were killed as a result of kidnapping and banditry since the elections. This is not a pleasant statistics’’, he said.

While Kallon claimed that institutional failure at all levels of governance is responsible for the killing of over 1,400 persons since March 2019, particularly by armed herdsmen, bandits, and kidnappings, he also called on the government to pay attention to issues of insecurity.

According to the UN chief, ‘’we all know the statistics and the menace of herders/farmers problems. There were more people killed by the herders and farmers crisis than the Boko Haram crisis in Nigeria. When I said this in Abuja, it was not being welcomed but that was one statistics we have.  These are all due to weak institutions and governance deficit at the Federal, state and local level.’’

At the event, Governor Ortom claimed that those responsible for fashioning out a solution to herdsmen attacks choose to politicise the issue. According to him, adopting the position of the National Economic Council which recommended ranching is the best solution to animal husbandry.

Kallon is in Benue state to follow up on earlier commitment by the UN to support the rehabilitation and resettlements programme for victims of herdsmen attacks in the state.