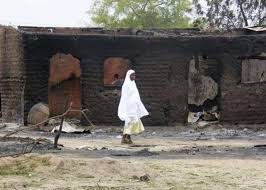 Police in Nigeria says at least six people have been killed in inter-ethnic violence in the northern state of Adamawa.

A police spokesman said the clashes between members of the Hausa community and the Chabo started after a road accident.

Scores of houses were torched during the fighting, forcing hundreds of displaced residents to flee.

A joint military and police team was deployed to restore order.

State Governor Ahmadu Fintiri, who visited the scene, expressed shock at the scale of the destruction.

Local residents say 35 people were killed – a much higher number than that given by the police.