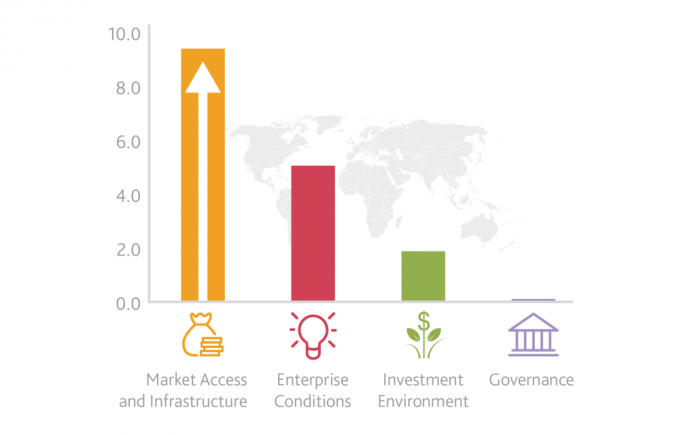 Hong Kong has been ranked the world’s most Open Economy by the Legatum Institute, a London-based think-tank. In its inaugural Global Index of Economic Openness which   it launched over the weekend with support from Templeton World Charity Foundation, the think-tank noted that globally Economic Openness is at its highest-ever level, improving by eight per cent. Of the 157 countries it ranked, 130 countries, representing 90 per cent of the world’s population, have improved on their market openness since 2009, with  the gap between the lowest and highest score has closing, albeit slowly. The ranking was with respect to the extent to which the economic systems of those countries enable trade, competition and productivity using four metrics – Market Access and Infrastructure, Investment Environment, Enterprise Conditions and Governance

The report found that Rwanda, which is ranked 78th is the sub-Saharan African country that has improved the most since 2008. The driver for country’s change, according to the report, came from  its Investment Environment, where it now ranks 51st. Rwanda is a well-known reformer in reducing the burdens on businesses and making it easier to start a business. In the last 10 years, for example, the time spent in filing taxes has almost halved to 94 hours, ranking it now 15th in the world.

Nigeria has fallen 13 places in its market openness since 2009, and is now ranked a lowly 130th. Its weakest pillar, according to the report  is Market Access and Infrastructure. According to the report, Nigeria is “particularly poor on transport infrastructure, where it ranks 149th for the quality of roads and 140th for efficiency of seaport services. It has seen some improvement in its Investment Environment. It has, for example, improved the access to credit information by guaranteeing borrowers the legal right to inspect their credit data from the credit bureau and by starting to provide credit scores to banks, financial institutions and borrowers.”

The report noted that in sub-Saharan Africa generally   there has been a fall in Government Integrity and Government Effectiveness and that countries whose score fell often did so because of violence and failures of Governance.