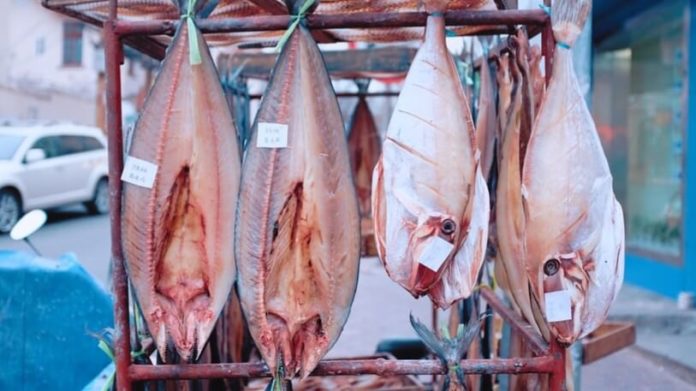 The United Nations Conference on Trade and Development (UNCTAD) says fish and seafood exports could drop by about 33 percent this year.

For international tourism, available data points to a 22 percent decline in the first quarter of 2020.

And data from MarineTraffic shows port calls of all major vessel types have been down – especially for passenger ships, which saw a 29 percent fall by the first week of last May.

The trade in fish and seafood products generates over $150 billion annually. And coastal tourism has become a major source of revenue and jobs for many vulnerable island nations.

The world celebrated Oceans Day on June 8, but the world depends on the ocean and its resources every day for jobs, food and economic prosperity.

Ocean’s resources sustain the livelihoods of three billion people, and more than 80 percent of the goods the world consumes are transported over water.

But the constant movement of ships has harmed seas, mass tourism has placed huge pressure on some of the planet’s richest and most fragile ecosystems – like mangroves and coral reefs – and industrial fishing has left about 34 percent of global fish stocks below biologically sustainable levels.

UNCTAD’s Director of International Trade, Pamela Coke-Hamilton, “Our increasingly unsustainable use of marine resources for economic activities have hurt the health of our oceans, seas and coasts. The COVID-19 crisis offers an opportunity to turn this around as we rebuild sectors of the blue economy.”

The global lockdown measures used to curb the spread of the coronavirus pandemic have, to a certain degree, wreaked havoc on the fishing, tourism and maritime transport industries.

Ambassador Rui Macieira of Portugal called on governments and businesses to rebuild in a way that ensures more responsible use and restoration of the ocean, seas and coasts.

“The current pandemic has caused disturbance across all sectors of the blue economy, but we should take advantage of this moment to ensure a sustainable blue recovery,” Mr. Macieira told a United Nations online meeting held ahead of World Oceans Day.

A potentially dramatic decrease in trade of fish and seafood due to the pandemic offers governments the opportunity to rethink how they support the fisheries sector.

Overfishing has in part been possible because of government subsidies that have made it cheaper to hunt for fish further and further out at sea.

Even as oil prices hit at a 25-year low in April, governments continued to pay fuel and other capacity-enhancing subsidies estimated at about $10 billion in OECD member countries and potentially above $20 billion worldwide.

“The coronavirus pandemic put a new spotlight on the issue of capacity-enhancing subsidies”, says Audun Lem, Deputy Director of Fisheries and Aquaculture at the UN Food and Agriculture Organisation.

There has not been a better time for governments to shift from subsidies that contribute to Illegal fishing activities, overfishing and overcapacity in favour of more support for responsible small-scale fishers and sustainable management.

Such a shift would help not only to assist in reversing the overexploitation of fish stocks but also to help small-scale fishers, who make up the lion’s share of the world’s 9.4 million fishers, 90% of whom live in developing countries.

The kind of decline in international arrivals estimated by the World Tourism Organization would result in a loss of $7.4 billion for these vulnerable nations, equivalent to a 7.3% fall in GDP.

In regions such as the Eastern Caribbean, serious consequences have already been felt. Head of the Organisation of Eastern Caribbean States’ permanent delegation in Geneva, Stephen Fevrier, says “the coronavirus pandemic has decimated the travel and tourism sector in the region.”

Fevrier said the pandemic has already resulted in thousands of lost jobs and the total closure of the accommodation and attractions sectors in the region.

“To secure the future sustainability of the sector”, he said, “the region needs to redouble efforts aimed at creating a low-impact tourism product.”

He called for a “2.0 approach to coastal and marine tourism”, which would include showcasing best practice in environmental sustainability and paying more attention to the value of local and regional cultures and ecosystems.

Mainstreaming sustainability in the industry, he said, would also require strengthening the relationships that tourist operators, hotels and restaurants have with local communities and marine protected areas and responsible fisheries.

The pandemic and ensuing crisis have also raised the urgency to make the maritime transport sector more sustainable.

UNCTAD’s chief of trade logistics, Jan Hoffmann, said this could be done through measures such as digitising trade procedures and processes, which would help reduce CO2 emissions in the long-run and have the immediate benefit of making it easier and faster to move goods across borders.

“This crisis is above all a crisis of supply”, he said, “unlike the financial crisis of 2008, when the downturn came from plummeting demand.”

Lockdown measures aimed at curbing the spread of the disease have left factories closed and disrupted the supply of goods and thus international trade.

In response, governments and border agencies, including port authorities and customs administrations, are pushing for reforms that aim to keep trade flowing while protecting populations, transport workers and officers at the borders.

“Most of these reforms are positive not only during the crisis but may also help revive our economies by facilitating trade in years to come”, Hoffmann said.

UNCTAD recently released a 10-point action plan to help the transport sector in these efforts.

Sustainable Development Goal 14 calls upon us to conserve and sustainably use the oceans, seas and marine resources.

UNCTAD advocates for a sustainable blue economy, in which sectors such as fisheries, tourism and maritime transport contribute to economic growth and improved livelihoods while preserving the health of the ocean ecosystem.