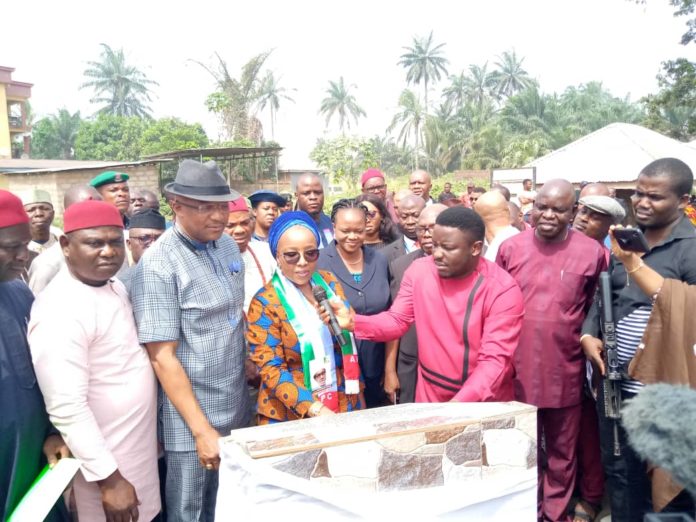 The Umunze Erosion/Flood Control and Road Improvement Works were today commissioned and handed over to the Umunze community, in Orumba South Council Area of Anambra State.

The project which was executed by the Federal Government, commenced on the 20th of September 2018, was completed on the 19th of June last year. 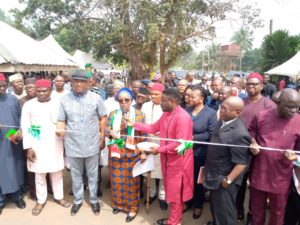 At the ceremony, President Muhammadu Buhari who was represented by the Minister of State for Environment, Lady Sharon Ikeazor said Anambra is in a state of emergency as regards erosion and flooding, noting that the project is one of the efforts by the Federal government at addressing the challenge.

“The age-long problem of gully erosion and flooding in this part of the country cannot be overemphasized and the Federal Government of Nigeria is aware of that and doing everything possible to address the problem. This project demonstrates the commitment of President Buhari to ensure that no part of the country suffers neglect owing to its geopolitical location or religious affiliation,” Ikeazor said.

Anambra State Governor, Chief Willie Obiano represented by the Deputy, Dr. Nkem Okeke appreciated President Buhari for the various interventions of his government in Anambra lately, especially as it concerns erosion related issues, and called for more of such interventions as there are still many problems to be addressed.He cautioned Ndi Anambra against indiscriminate dumping of wastes inside drainage channels and construction of buildings on waterways as such practices are major causes of erosion outbreak.

Obiano said, “Anambra is the second smallest state in the country in terms of landmass but we are fast becoming the smallest because as Lagos is recovering lands from the sea, we are losing lands to gully erosion. The state government is trying its best to tackle the challenge but we need more help from the Federal Government, the World Bank, and other development partners to tackle this issue.”

On his part, the Permanent Secretary, Ecological Fund Office Abuja, Dr. Habiba Lawal represented by a director in the Ministry, Mr. Felix Okeke, revealed that the project was initiated through a request for urgent intervention forwarded to the Ecological office by an indigene of the town, Felix Okeke in order to arrest the continuous flooding and erosion menace in the town.

According to him, the commissioning and handover of the project to the community are to ensure its maintenance and sustainability.

Responding on behalf of the community, the President General Umunze Progressive Union, Mr. John Akanyeonu thanked the federal government for the completion of the project and assured they will protect it from vandals.