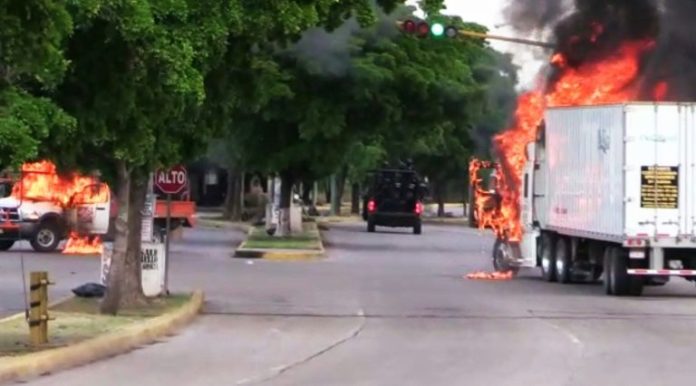 Mexican officials on Friday admitted they had bungled the arrest of kingpin Joaquin “El Chapo” Guzman’s son, who they let go during shootouts with drug gangs in the streets of a major city, but the president insisted his security strategy was working.

Cartel gunmen surrounded around 35 police and national guards in the northwestern city of Culiacan on Thursday and made them free Ovidio Guzman, one of the jailed drug lord’s dozen or so children, after his brief detention set off widespread gun battles and a jailbreak that stunned the country.

The chaos in Culiacan, a bastion of Guzman’s Sinaloa Cartel, turned up pressure on President Andres Manuel Lopez Obrador, who took office in December promising to pacify a country weary of more than a decade of gang violence and murders.

Security forces were attempting to enforce a federal judge’s arrest warrant against the younger Guzman for his extradition, drawing a fierce response, the government said.

In the end, Lopez Obrador came under heavy criticism on social media and from security experts, who said that authorities risked encouraging copycat actions by caving in to the gang, and that the retreat from a major city created the impression that the cartel, not the state, was in control.

His own officials said the operation in Culiacan, the capital of Sinaloa state and home to nearly a million people, had not been planned as well as it should have been.

“It was done hastily, the consequences were not considered, the riskiest part wasn’t taken into account,” Defense Minister Luis Cresencio Sandoval told a news conference in Culiacan, alongside Security Minister Alfonso Durazo, who called the attempt to capture the Guzman son a “failure.”

Durazo admitted he and the military top brass were not aware ahead of time of the mission to take into custody the alleged trafficker, calling it a bureaucratic error.

But the president defended the government’s response.

“Capturing a criminal can’t be worth more than people’s lives,” he said, adding that officials “did well” to free Ovidio Guzman. “We don’t want dead people, we don’t want war,” said Lopez Obrador, a veteran leftist who has advocated a less confrontational approach to tackling the gangs.

“We’re doing really well in our strategy,” he said.

The violent reaction to Guzman’s apprehension in a wealthy area of Culiacan was on a scale rarely seen during Mexico’s long drug wars.

Sandoval said he had reports of at least eight people killed, including five suspected gang members, in Culiacan, where schools were closed on Friday after the ordeal.

More than 200 soldiers were being sent to reinforce the city on Friday evening, a spokeswoman for the security ministry said.