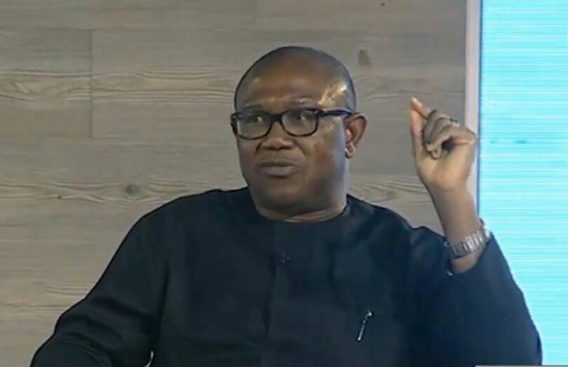 Vice-Presidential Candidate of the People’s Democratic Party, PDP, in the 2019 general elections, Mr. Peter Obi, has appealed to youths across the country, particularly those from Anambra  State, to go off the streets in order not to allow their well-thought-out protest which has been supported by people that have the good of the country at heart, to be hijacked by forces of darkness.

The appeal was made known in a statement made available to TNC on Monday, personally signed by Mr. Obi.

Recalling his various tweets and statements thus far on the protest, Obi said it was pertinent, at this time, to continue to remind Nigerian youths that they have done very well commencing the process of extricating their future from those who do not care about them.

“Your message is taken seriously by Nigerians and the International Community when disseminated through peaceful means or in an environment where peace reigns, which is what the bad eggs, who have infiltrated the protest are not happy with,” he observed.

He especially pleaded with the youth of Anambra State to hearken to the words of Governor Willie Obiano and stop the protest now so that “our dear State does not become notorious for looting, arson, rape, rapine and other criminal activities.”

These, according to him, are not vices any State or people should be proud of.

“As the Light of the Nation, we shall strive to continue to show the light,” Obi declared.

On the threat by a reckless fringe that Igbos should leave the South-West, Obi thanked South-West leaders for rising to the occasion by condemning it, describing it as a barbaric and atavistic throw-back to old and superseded ways.

He asserted that such threats should be condemned by all men and women of goodwill as part of the grand plan to trivialize the spontaneous statement by the youth that ‘Enough is enough’!

He also thanked leaders from other zones who are working round the clock to check the menace of enemies who have hijacked the peaceful #ENDSARS protest.

Similarly, Obi pleaded with Igbo youths in different parts of the country to continue to be of good behaviour.

“To those in the East, I appeal to them to continue to maintain harmonious co-existence with those from other parts of the country residing among them. I want to commend the leadership of Ohaneze under its President-General, Chief Nnia Nwodo for his strong presence of mind.

“I commend Chief Nwodo for staying alert to the situation, issuing statements and appearing on electronic media to clarify the position of the Igbo. This is in sync with the position of all well-meaning organisations worldwide,” he said.

Concluding, Mr. Peter Obi advised the youth to closely monitor the implementation of their demands which the Government has already accepted.

He also urged all those that have suffered brutalities and other indignities in the hands of the now-defunct SARS to report to the various panels set up for that purpose.

In an earlier message to Nigerians sent out through his Twitter handle on Thursday, October 22, 2020, Obi had noted that the purposeful and peaceful ‘#ENDSARS and enthrone good governance’ protest appears to have been hijacked by the enemies within.

He alleged that the hijackers are now using it to kill or harm innocent people, and to destroy public assets and property of hard-working Nigerians.

The message had read, “For every life lost, we all lost; for everyone harmed, we are all harmed; for every public or private asset destroyed, our collective assets are destroyed. This is not in our character and must not be allowed to continue. Ours is to build, not to destroy.”