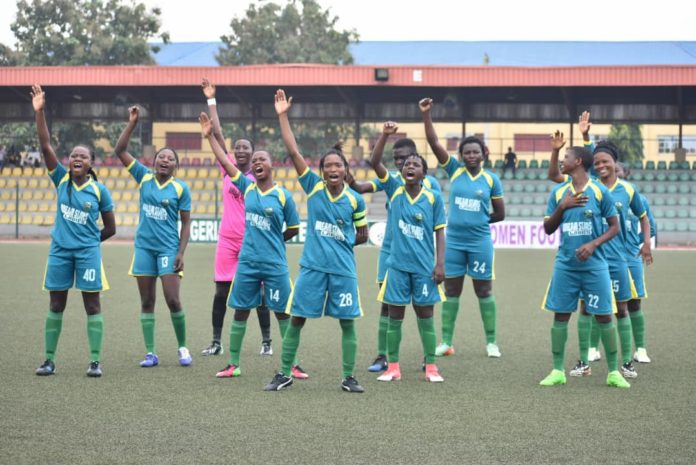 Dream Stars Ladies defeated Invincible Angels 4-2 via penalty shoot out after the regulation time ended 1-1 in the 2019 NWPL Relegation play-off to keep their league status.
The Pride Of Lagos opened the scoring in the 21st minute  through captain Judith Nwaogu’s glancing header from Anuoluwapo Salisu’s corner.
The first half ended 1-0 in favour of Dream Stars Ladies, but Invincible Angels came out fighting in the second half. Their fight paid off late in the second half from a defensive mix up by Dream Stars.
Kafayat Bashiru took advantage of the mix up in the 84th minute to restore parity for Invincible Angels.
Both teams failed to find the winner as the match ended in 1-1 draw.
Elizabeth Zirike scored the last kick of the shoot out to keep Dream Stars Ladies in the NWPL.
Dream Stars Ladies Goalkeeper, Faith Omilana saved one penalty kick adding to her impressive performance in the regulation time.
Both teams gained promotion from the Pro League at the beginning of the season, but The Pride of Lagos retained their status while Invincible Angels made a quick return to the lower division.
Dream Stars Ladies coach, Bankole Olowookere expressed his excitement in a post match interview with Dream Stars media.
“I am very happy for the victory because nobody gave the team the chance to escape relegation”
“Kudos to the players for playing their hearts out, I also want to thank the management for their constant support”
“We are going to sit down and review our performances and correct the mistakes in order to come out stronger next season “
Bankole concluded by praising the club fans for their unflinching support.