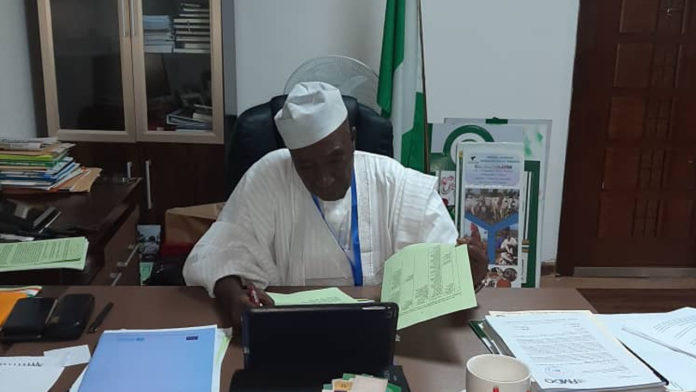 The Nigerian government is still pressing ahead with its N13 billion pest control deal across 12 states in the North despite a protest by someone who knows better.

Vanguard had reported that former President of the All Farmers Association of Nigeria (AFAN), Kabir İbrahim, kicked against the disbursement of N13 billion to fight pests in Northern Nigeria.

He reportedly faulted the approval of the fund, claiming it was not provided for in the 2020 budget nor was it appropriated for that purpose by the National Assembly.

But the Agriculture and Rural Development Minister, Mohammed Sabo Nanono, is claiming that the fund was approved. He was speaking during a flag-off ceremony for the 2020 wet season trans-boundary migratory pest control.

The states to be covered under the funds are: Sokoto, Kebbi, Zamfara, Katsina, Kano, Jigawa, Bauchi, Gombe, Adamawa, Taraba, Yobe and Borno.

At the ceremony held at the Birnin Kebbi International Airport in Kebbi State, Nanono noted that the intervention fund will help to control the transboundary flow of pests such as quelea birds, locusts and grasshoppers.

According to him, it will also help Nigeria to ensure uninterrupted agricultural activities during the 2020 farming season and to minimise the impact of the novel coronavirus pandemic.

There have been worries from some quarters over the details of the pest control fund considering the cost.

The Technical Adviser on Knowledge Management and Communication to Nanono, Richard Mark-Mbaram, a lawyer, however, note that pest control was beyond spraying of chemicals.

He explains that the fund will cover the cost of refurbishment of old equipment and purchasing of new ones, procurement of chemicals, and the deployment of personnel, adding, the fund will also cover the setting up of a mechanism for early warning systems, as well as cover the costs for research into biotechnological and more environmentally-friendly approaches to pest control.

His principal, Nanono had pointed out that pest control became important following reports of desert locust outbreak in East Africa and the Middle East, with the possibility of a spillover into West Africa, including Nigeria.

While the minister noted that the fund will help Nigeria ensure uninterrupted food supply in the country by protecting crop production, he further submitted that President Muhammadu Buhari “is very determined to fight any menace that would truncate the tremendous success recorded so far especially in the agricultural sector.”

The choice of Kebbi State for the flag-off, according to him, ‘’is deliberate given the extensive agricultural activities in the state and the immense cooperation and collaboration of the state government in the implementation of agricultural interventions over the years.”

Nanono also lauded Governor Abubakar Atiku Bagudu of Kebbi State and other governors of the front-line states for their collaboration and cooperation with the ministry towards reducing the effect of migratory pests across the states.

In his remarks, Bagudu commended Buhari for his vision and people-orientated policies in the agriculture sector.

The governor said that the president’s commitment towards the sector will help to ensure job creation, increase food security and boost the economy for the good of Nigerians.

Mudi’s election as national president by a 13-member National Working Committee in March this year had been trailed by opposition from Ibrahim – a tussle which landed in the Federal High Court in Abuja in the same month.

Speaking on the pest control fund, Ibrahim noted that it was unnecessary to spend such an amount on a “perceived problem” that is yet to “rear its head”.

In a statement, Ibrahim called on the National Assembly to “summon a stakeholder hearing to appraise this matter”, adding, ‘’Nigeria is going to spend N13 billion to fight quelea birds, locusts, and pests is not provided for in the 2020 budget and, therefore, unappropriated by the National Assembly.

“For this kind of information to be churned out to the public is tantamount to gross indiscipline and gross misconduct by any public officer who perpetrated it. The public domain is awash with consternation as to the basis for this kind of talk by the driver of the Nigerian food system.

“The farmers are at a loss when this kind of information comes out especially when they are struggling to access their farms due to insecurity.

“For the farmers who are not sure of even being able to produce anything to wake up to the realisation that the government is planning to spend this kind of money on a perceived problem even before it rears its head is nebulous.”

Ibrahim also urged the Federal Government to initiate a directorate that will be responsible for ensuring food security in the face of the global pandemic.