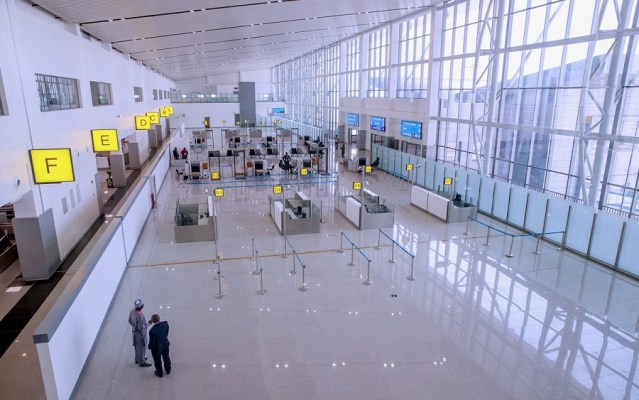 The government of Denmark is currently supporting the project Enhancing Air Border Data Systems in Nigeria. Like many other countries, Nigeria now recognises the economic, social and political benefits of international mobility.


The Nigeria Immigration Service (NIS) on Tuesday officially opened its new Migration Information and Data Analysis System (MIDAS) at the Nnamdi Azikiwe International Airport in Abuja.  MIDAS in Nigeria is also being supported by other donors including the governments of Germany, Japan, Norway and Switzerland as well as the European Union.

This nationwide system will enable real-time data synchronisation between the airports and the NIS Headquarters in Nigeria’s capital to effectively monitor those entering and exiting through the country’s air borders.

The system can also send automatic queries to InterPol databases and relevant watchlists in order to detect travel documents and individuals potentially linked to transnational organised crime, including human trafficking and migrant smuggling.

“MIDAS helps the Government of Nigeria to better understand mobility patterns through its statistical information and also ensure that those crossing Nigerian borders do not pose threats to national and international security”, explained Muhammad Babandede, NIS Comptroller General during the commissioning event at the airport.

MIDAS also enables states to more effectively monitor those entering and exiting their territory by land, air and sea while providing a sound statistical basis for migration policy-related planning.

To date, the project represents the largest deployment of MIDAS at any airport globally and it will be implemented in four other Nigerian airports welcoming travellers: in Lagos, Enugu, Kano and Port Harcourt. This marks a breakthrough for Nigeria which hopes to establish one of the world’s largest MIDAS data networks.

“MIDAS improves the effectiveness and efficiency of Nigeria’s air border management by strengthening NIS’ ability to manage and facilitate cross border movements”, added Nicolai Ruge, Ambassador-at-large for Migration of the Government of Denmark.

“This is just the beginning. With support of the international community, we will continue investing in strengthening legal, technical and operational capacities of Nigerian authorities in the area of border management in line with international standards and good practices”, said Ivanka Spadina, IOM Senior Programme Manager.

A set of standard training packages is also being delivered for the country’s immigration officers and government IT focal points as part of the MIDAS roll-out. IOM also promotes a responsible use of biometrics, in full respect of privacy and personal data protection laws and international standards.

MIDAS has been designed to be compliant with international standards (ICAO and ISO) and is currently operational in over 20 countries globally.

IOM also ensures that governments such as Nigeria have the full and exclusive ownership of any data recorded by MIDAS.