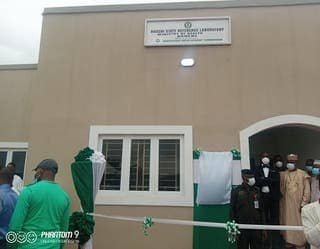 A molecular laboratory has been commissioned by the Bauchi State Government. It is equipped by the North-east Development Commission  (NEDC) with supervision from the Nigeria Center for Disease Control (NCDC).
The Bauchi State Governor, Senator Bala Mohammed Abdulkadir, while commissioning the laboratory on Monday, said that it was established in order to fast track sample testing and control of infectious diseases in the state.“The establishment of the Center became necessary following the difficulties faced by officials of the state in tackling the COVID-19 pandemic considering that samples had to be taken to Abuja and later Jos for testing, a development that was too cumbersome.“I am happy for this groundbreaking ceremony in the state because our efforts as a government have paid off. The NCDC was approached for permission while the NEDC took the responsibility of equipping the Center and the state provided the structure.
“With the establishment of the Center and commencement of operations, the issue of sample testing for COVID-19 infection will be laid to rest. At this juncture, I want to commend the committee for doing a good job,” he said.The Chairman of the Center implementation committee, Dr Ladan Salihu, commended the governor for establishing the centre through his support and timely release of the required funding saying Bauchi State has joined the league of the few states that have such laboratory in the country.