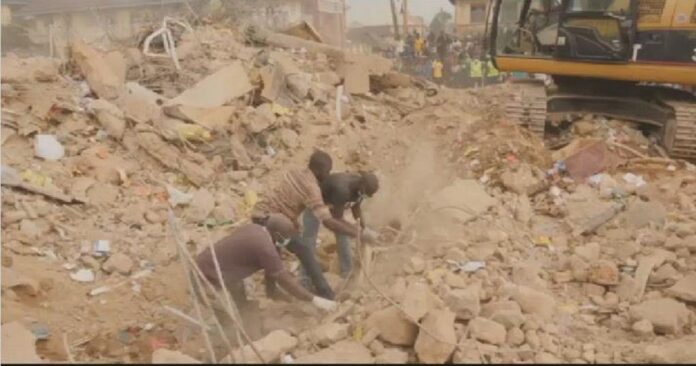 An unidentified couple has been killed when a one-storey building collapsed on Sunday in Umuota village, Obosi in Idemili North Local Government Area of Anambra State.

The couple’s baby was also injured in the incident, while many are believed to have been trapped in the collapsed building.

According to an eye witness, the incident happened at about 4pm on Sunday, although the cause of the collapse is yet unknown.

When TNC correspondent visited the scene of the collapse at about 6pm, the area was cordoned off by the police and other security agencies while effort was ongoing to rescue other victims suspected to have been trapped inside the building.

Confirming the deaths, the Spokesperson of the Aanmbra State Police Command, Haruna Mohammed explained that the area was cordoned off by the police attached to Obosi Division and other security agencies, in order to prevent hoodlums from gaining advantage to loot while rescue efforts were ongoing.

“The bodies of the man and his wife whose identities are yet to be ascertained were confirmed dead by a medical doctor and their baby is responding to treatment.

“The corpses have been deposited at St. Edward mortuary for preservation while case is under investigation to ascertain circumstances surrounding the incident,” Mohammed said.