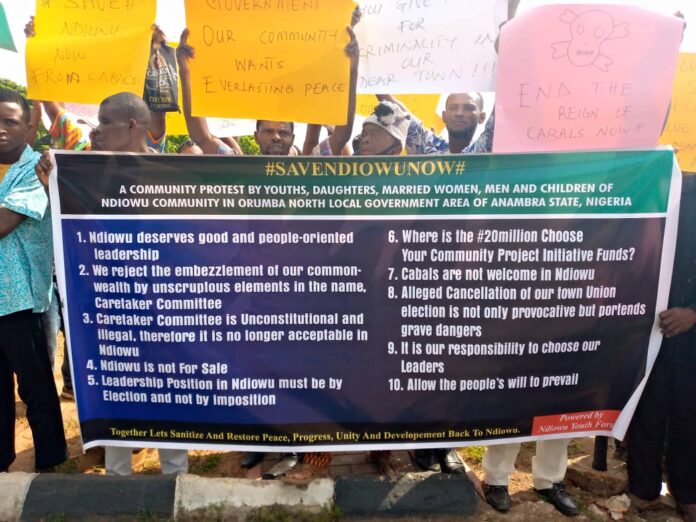 Indigenes of Ndiowu in Orumba North Council Area of Anambra state on Monday besieged the State Government House in Awka in protest over what they called ‘hijack of the community and undue exploitation of the people’ by some cabals in the community.
The protesters also bore placards bearing various inscriptions that indicted the Deputy majority leader of the State House of Assembly, Hon Emeka Aforka of embezzlement, high-handedness and imposition of leadership on the community.

They proceeded from the government house down to the State House of Assembly Complex, Awka, chanting protest songs and calling on the state government to intervene on the matter.

A 75-year old man, Ikechukwu Orji who led the protesters, said the protest was to register their displeasure over the issue which has brought under-development, backwardness and retrogression in Ndiowu.

According to him, the problem in the community has made it impossible for elected executives of the town union to emerge.

“The absence of an Eze, the traditional ruler, and a substantive Town Union Executive have further compounded the whole issue, giving room to opportunists to capitalize on that vacuum, to unleash terrible political displays to cage our community from moving forward.
“It is, therefore, against this backdrop that we, the members of Ndiowu Community, comprising of the Umuada, Anutaradi, Men, Youths and all the nine villages of Ndiowu, wish to call the attention of Anambra State government to assist us address this legitimate concern as we are fast losing our patience which could lead to a possible breakdown of law and order in Ndiowu.

“The major purpose of this protest to the Statehouse is to officially register our displeasure and grievances and seek possible solutions to this persistent and endless hijack by a clique, which has created an avenue for criminality, embezzlement and enthroned exploitation of our collective commonwealth by some greedy and mischievous persons with the concomitant under-development, backwardness and retrogression in Ndiowu,” he said.

The Youth leader in the community, Obiorah Mgbemena and a youth, Amechi Okeke appealed to the government to acknowledge their Town Union Executive elected on the 26th of December, 2019 by the majority of Ndiowu people, after a widely publicized circular was properly passed to all Ndiowu indigenes, both home and abroad.

“Government needs to carry out an independent investigation and unravel the true cost analysis of the renovation of Our Town hall and where the balance was expended, bearing in mind that the money was earmarked for two distinct projects.

“Our governor should identify and caution these self-styled cabals threatening the peace and unity of Ndiowu and since the unconstitutionality and illegality of the Caretaker Committee is not in doubt, they should be disbanded with immediate effect and a substantive Town Union Executive installed.

“Our prolonged silence, non-violence after five years of non-performance of the Caretaker Committee, should not be mistaken for cowardice or our inalienable right to fight and defend ourselves against the injustice, impunity and infringement of our fundamental human rights. In as much as we advocate for peace and de-escalation of the crisis, it is our calculated opinion and resolve that if these critical issues are not addressed within an anticipated time of 14days by the State government, we may be forced to resort to use of youth’s last option to handle it. Enough is enough,” they said.

Addressing the protesters, the Secretary to the State Government, Prof Solo Chukwulobelu harped on the need for communities to explore internal mechanisms to resolve their differences instead of bringing them to third parties.
While commending the protesters for conducting themselves peacefully, Chukwulobelu assured that government will wade into the matter immediately. 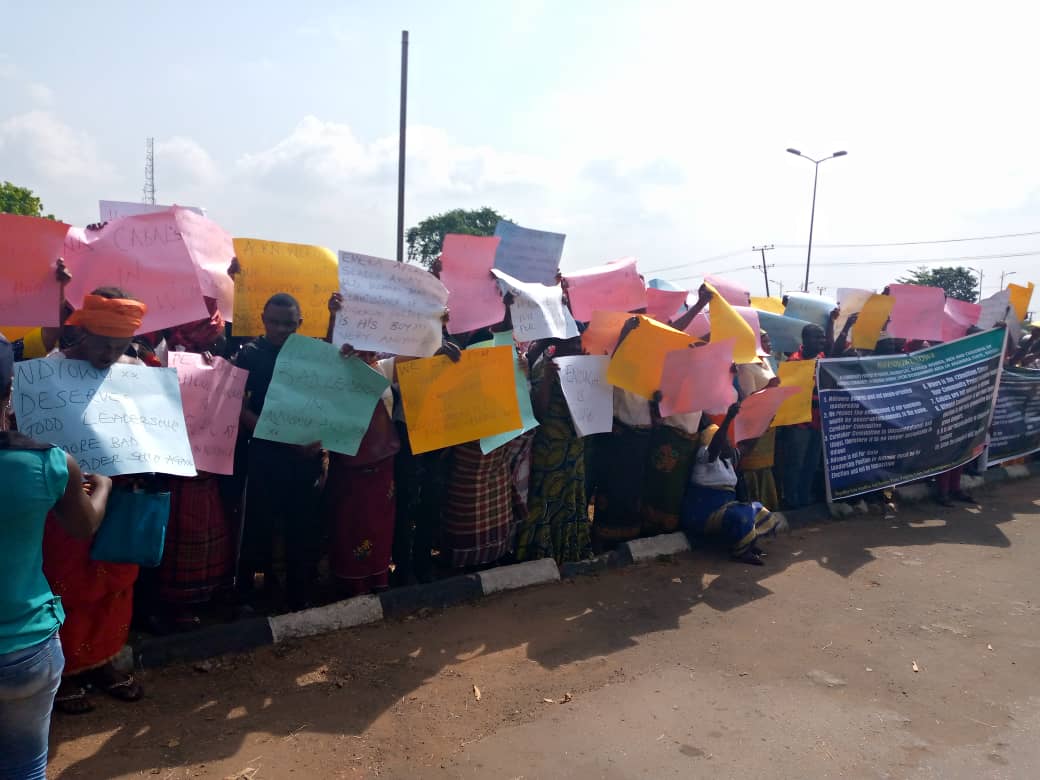 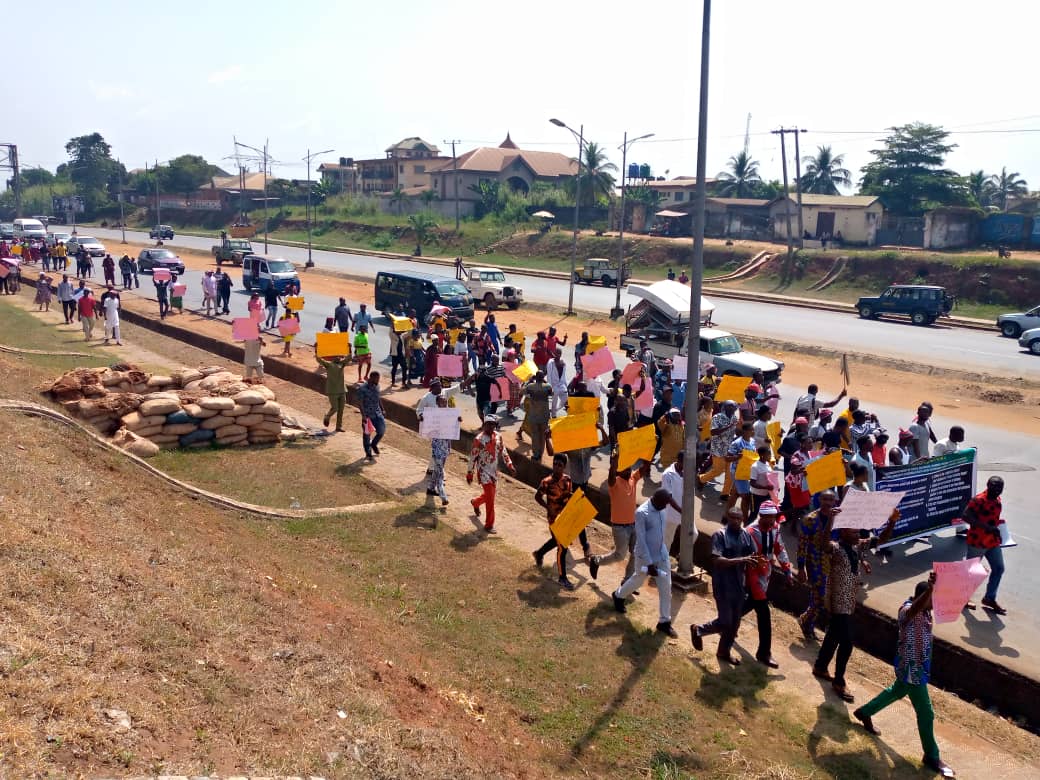 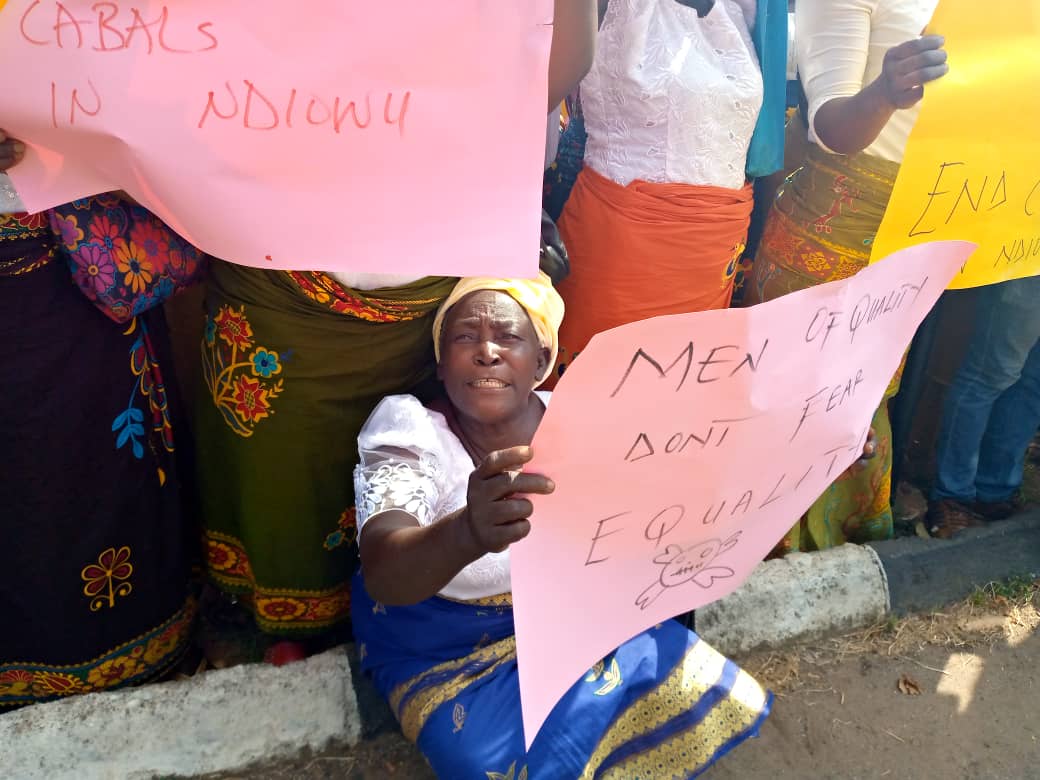 When TNC correspondent spoke to the deputy majority leader, Hon Aforka, who was accused by the protesters, he denied all the allegations against him, saying that the protest was sponsored by a former President General of the Town, Chike Emenike, who has refused to leave office.

He revealed that there has been no election into the town union executive due to series of litigation instituted by the former PG, who he said has caused so much trouble for the community.

“What we are experiencing is a sponsored protest. The whole problem began when the tenure of the said Emenike expired in 2015 and he refused to step down. Instead, he went ahead to amend the constitution that stipulates a two year term for Presidents General of the town. When we objected, he took us to court and branded us unprintable names. He eventually lost the case at the Ekwulobia court and proceeded to the court of Appeal. The matter is still pending at the court and that is why elections into the town union have not held in Ndiowu,” he explained.

Aforka described the protest as an effort in futility, as according to him, the intent is false.