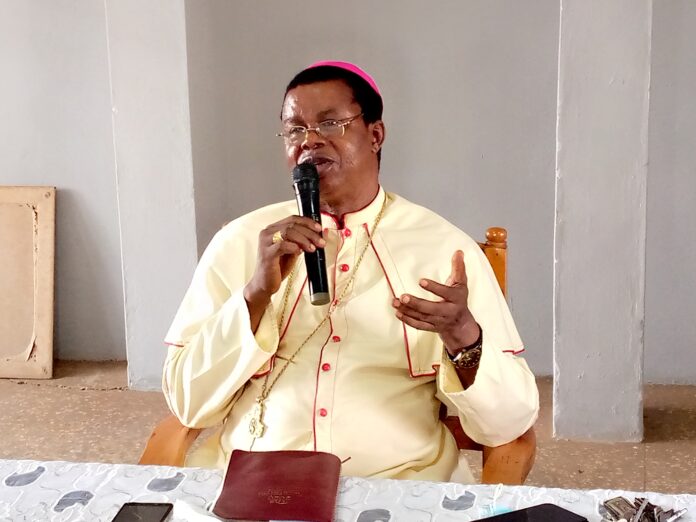 Awka – Nigeria needs to retire all its expired leaders to inject new blood that can engender a turnaround from the negative socio-economic fortunes it is faced with presently.
The Catholic Bishop of Awka Diocese, Most Reverend Paulinus Ezeokafor made this known in a message yesterday at St Patricks Cathedral, Awka to mark today’s Christmas Celebration.

Bishop Ezeokafor is of the opinion that the present regime at the Federal level is full of politicians who are no longer in tune with the present day socio-economic and political demands and their continued stay in office, spells doom for the nation.

According to him, the worst kind of corruption is staying put in office when one is sure that they have nothing to offer and by so doing, denying young people with potentials, the opportunity to come in and make meaningful change in the system.

“When we hear the noise the present administration is making about fighting corruption, one would expect that it should be an all-round war. But it is surprising that such is not the case and we wonder why it should be so. We have seen selective approach in the corruption war where those in the ruling camp have government protection and the opposition is prosecuted. Within the government, we have seen people who no longer understand what obtains in this present age, yet they sit tight on their positions. This does not help the system and the people are not happy about it,” he said.
Bishop Ezeokafor lent his voice to calls for the resignation of the service chiefs following the spate of insecurity in the country.

According to him, the present administration has failed in its first line responsibility which is protection of lives and property of citizens due to the incompetence and lack of ideas by the service chiefs.

“It is worrisome that the promise to address insurgency and terrorism which President Buhari made before his first term remains unfulfilled more than four years after and there is no hope to do so. The reason is not far-fetched- the persons in-charge of security in the country are not equal to the task and they have failed to retire. President Buhari should as a matter of urgency, disengage them and hire new hands who can bring new ideas into the security business,” he noted.

On the abduction and release of over 300 Kankara school children, the Prelate expressed worry over the whole incident, noting that the way the whole episode played out reeks of some shadow business.

In his view, negotiating with terrorists is a very dangerous trend and the Federal Government must not condescend to such low levels in finding solution to the acts of terrorism perpetrated across the country.

“When you negotiate with terrorists and pay them, they get the required funds to reinforce and advance their activities. Sometime in the past, we heard some state governments were negotiating with them and I condemn that. Terrorism is a crime and government must deal with perpetrators and not negotiate with them, else it will be sending a wrong signal that it encourages such,” Ezeokafor opined.

He harped on the need for Nigeria to explore other natural resources in the country, to find another foreign exchange earner for the country so as to end her dependence on oil.

He said Agriculture must be taken more seriously and government should show more commitment to driving the ongoing revolution in the sector to ensure that the nation attains food sufficiency.

In his words, “It is not a good thing that Nigeria as at now, is still a mono economy especially when we have other things that can constitute sources of revenue for us. The COVID-19 pandemic and the emerging new technologies have made it even more imperative for us to look into other things. In this light, the Federal Government must as a matter of urgency, commence a process that will deemphasize our sole dependence on oil because if we do not and we eventually find ourselves where the world is tilting to, we may get stuck economy-wise.”
On Christmas, the Catholic Prelate urged uhristians to imbibe the virtues of love and sacrifice for their fellow humans as exemplified by God through the gift of his son, Jesus Christ which is celebrated during Christmas.

Bishop Ezeokafor who noted that Christ is the reason for the season, condemned the craze for materialism usually experienced during the season, adding that the season should usher in people, genuine reflection on how they live to ensure that the world is made a better place.