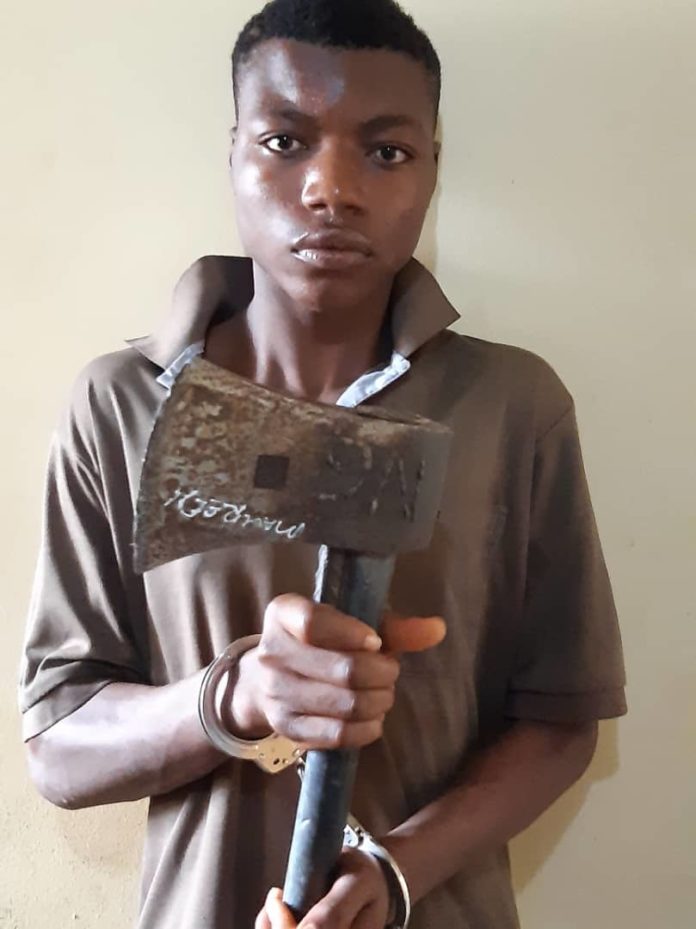 A 20-year old boy has been arrested for beheading his four-year-old nephew, one Chiemerie Ezekiel at Ugamuma Village, Obosi in Idemili North Local Government Area of Anambra State.

The suspect, Uchechi Eze of Ezza LGA of Ebonyi State had on the 16th of March, used an axe to commit the dastardly act and escaped to an unknown destination.

The Spokesperson of the Police in Anambra State, Haruna Mohammed said police operatives attached to Obosi Division had visited the Scene and taken the victim to Unity hospital Obosi where he was confirmed dead by a medical doctor and his corpse deposited at St Edward mortuary for autopsy while an intensive manhunt for the suspect commenced.

He said following intelligence report, Police detectives attached to Obosi division in conjunction with the Vigilante group in the area arrested the culprit at a criminal hideout where he was smoking a substance suspected to be Cannabis Sativa and the exhibit he used in perpetrating the dastardly act was also recovered in his possession.

The PPRO said the state Commissioner of Police, John Abang has directed that the case be transferred to the Criminal Investigation Department (CID) for discreet investigation after which suspect would be charged to Court for prosecution.

When interrogated, the suspect voluntarily confessed to the crime.

“The thing happened to me like an attack of madness. This is the second time this is happening to me. It was in the night and it turned me like madness. I have never had any problem with my aunty and after I killed the child, I removed my clothes and ran away before security men caught me. I plead for forgiveness because I never knew I could kill him,” he lamented.