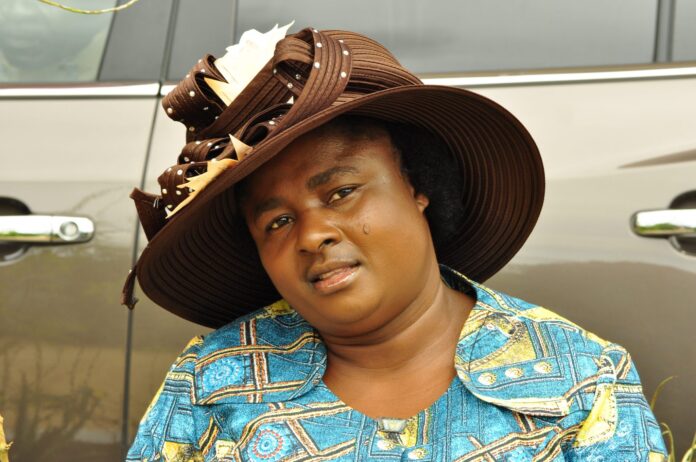 First generation Nollywood star, Helen Ukpabio, has sparked a potential hot controversy in Nigeria with her claim that President Muhammadu Buhari is not responsible for the current woes plaguing the country.

Lady Helen Ukpabio who now goes with the tag of Apostle as the General Overseer of Liberty Gospel Church, is claiming that ancient altars are responsible for most of the grave challenges in the country.

According to her, many of the problems and difficulties Nigerians are suffering are ‘’traceable to ancestral bonds and ancient altars dating back to thousands of years. 2020 was the climax of such suffering. 2021 will be different for many.’’The Calabar-based cleric was speaking during a sermon she preached at the 2020 Annual Retreat of the church, which ended in Okoyong Usang Abasi, Odukpani Local Government Area of Cross River State on December 28.Before conducting deliverance for hundreds of retreat participants, Ukpabio who was preaching on the topic Escalating Wrong Foundations Dating Back to 1,000 Years  said that family curses, worship of deities by forebears, sacrificing to evil altars and the like, were responsible for most illnesses, misfortune and setbacks that many were experiencing in life.She lamented that despite Egypt being the cradle of civilisation, Africa was still very backward, her scientists do not have solutions to many issues while the continent lacked history dating back to 200 years.Reading from Genesis 32:7, she said that unlike Moses in the Bible, many Christian leaders did not know much about the spiritual background of their members let alone teach or conduct generational deliverance for them.

She said new birth was good being the foundation to eternal life with Christ but deliverance connected to family, was necessary to liberate victims of such generational attacks and problems even after they are born again.Continuing, she said some forefathers had trespassed through association with demons and deities, servicing of evil altars, depositing or burying of objects in the family house or land, which later affected their children, grandchildren and great grandchildren.“When evil altars are raised and serviced, children born to such families come into captivity. In some cases, children are named after some deities and the name will affect such children in the course of life”, she said.

Ukpabio lamented that many churches were ignorant of the deep ancestral burden that their members were carrying while those affected lacked information about their family background. These, she said, resulted in worshippers suffering under curses for many years.But it was no accident that a large number of people flocked to the altar each time she called them out for deliverance prayer. The theme of the annual retreat being “Freeing Victims of Ancient Altars”, many had long prepared to benefit from the anointing of the well-known deliverance minister.

The deliverance sessions she conducted that for those suffering from family curses, those having deity-related problems, witchcraft cases and sicknesses. She conducted deliverance for witches and redemption for first-born.

There was much jubilation in the retreat ground after each deliverance session. Ukpabio told the people that they would step out of the event to enjoy a new beginning – that of a happy and fulfilled life. She urged them to continue to please God in their lives, adding that Year 2021 would bring a complete turn-around in their lives.”