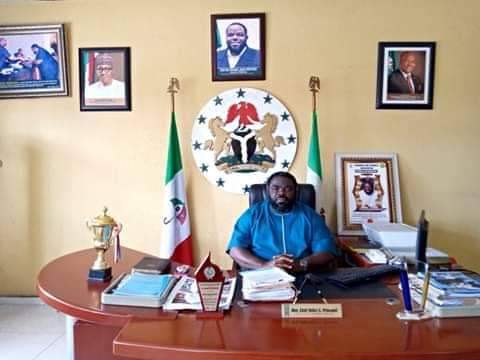 Rivers State Police Command has debunked rumours that the corpse of the late chairman of the Asari-Toru Local Government Area, Princewill Odiari was exhumed by unknown gunmen.

He was buried at about 10 am Thursday at the Port Harcourt Cemetery by the officials of the State Rapid Response Team on COVID-19 clad in personal protective equipment.
Rumours had it over the weekend that a day after he was buried, his remains were exhumed by unknown gunmen.

But, the Spokesman of Rivers Police Command, Nnamdi Omoni who led journalists to the Port Harcourt Cemetery to verify the veracity of the news, described it as false.
DSP Omoni shortly after inspecting the graveside of the late ASALGA boss, also said information from the officials the cemetery confirmed that no action like that took place.
He urged the public to disregard it, saying that it is the imagination of the enemies of the state.

“For all intents and purposes, this fake news is only intended to achieve selfish aims, to blackmail the command and to paint us in a bad light. By extension, the propagators want to cause unnecessary panic in the state. But that’s why we brought you here to see it yourselves and you can see that the grave has not been tampered with. The management of the cemetery has also lent its voice to say that nobody invaded here. No shooting was done here and no party came here for any unlawful purpose,” he maintained.
The Rivers Police Spokesperson, however, said to prevent such action from taking place, security has been detailed to patrol the premises of the Port Harcourt cemetery.

In his words, “The area commander and the DPO have been directed to increase security consciousness in the area just to guard against any eventuality. To act in abundant caution, we have men patrolling here till further notice.

Meanwhile, Secretary of the Port Harcourt Cemetery, John Tamunotonye who corroborated the position of the Police, called for more security for them to do their work unhindered.

“We came out early enough the next day after we heard the rumours but there was no such thing. The grave was intact. What I think is that maybe there are plans to carry out such activities but it has not been carried out. So we ask the security forces to beef up security around this premises because if by any chance they invade here, we do not have the weapons to stop them,” Tamunotonye pleaded.