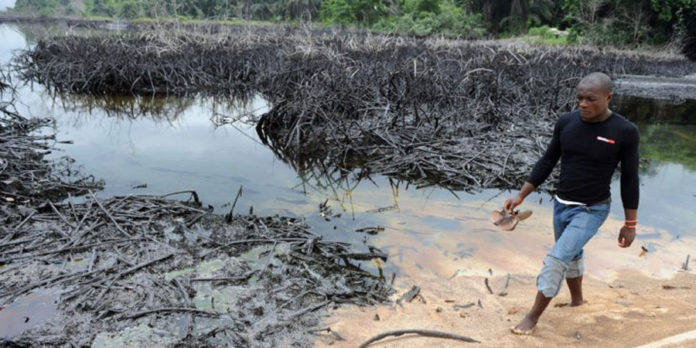 An oil spill from an oilfield operated by Nigerian Agip Oil Company (NAOC), a subsidiary of the Italian oil major, Eni, is currently causing unease in Okpoama, an Ijaw community in Brass Local Government Area of Bayelsa State.

The community says the oil spill has polluted the area, causing untold hardship to the predominantly fishing population.

Okpoama is a major dispersal town and its indigenes have migrated to all parts of the Niger Delta as far away as Cameroon leaving Okpoama settlements and footprints along the way.

Of recent, they have largely migrated to the major urban centres and the Diaspora. The overall population is placed in the region of 100,000.

Okpoama people are mostly fishing people. In recent years, they diversified into the palm kernel trade, commerce, oil and gas. Okpoama Kingdom is a host community to Agip which has its main oil-exporting facility on the Brass Island.

Brass Liquefied Natural Gas is in the process of completing preparatory arrangements for the take off of the LNG project in the kingdom. Like the rest of communities in the Niger Delta, Okpoama has an epileptic electricity supply.

The area is hosting the only airstrip in Bayelsa capable of being commissioned for domestic operations.  It is expected that it will be upgraded to operational status at the commencement of the Brass LNG.

​The Brass Island has serviceable internal roads and jetties.  The Nembe-Brass Road is presently under construction which on completion will link the Brass Island to the rest of the country.

However, Chairman of the Okpoama Kingdom Council of Chiefs, Chief Inikio Sele-Dede, said in Yenagoa, the state capital that the leadership of Okpoama where the Minister of State, Petroleum Resources, Timipre Sylva, is from, restrained their youths from going on a rampage because of the oil spill.

According to him, Okpoama youths had threatened and hatched plans to storm the Agip CudenTerminal in Brass over the leakage which occurred along the 24″Ogoda-Brass trunkline operated by Agip at Ikuiku near Ewoama-Brass.

Sele-Dede explains that the spill which is the second in the area since May 2020 was discovered on October 8, 2020, and is still discharging crude oil into the creeks and adjourning environment till date.

While lamenting that the leaking oil has spread to Fantuo, Canus Kiri Okpongbokiri, Inibomoye Kiri, Alafurughakiri, Inengigha Kiri as a result of the tidal current, the community leader said that NAOC officials visited the scene of the spill secretly without the knowledge of the JIV team in an attempt to stop the spill to no avail.

“In May this year, we had a similar incident not far from the present spill site. In this case, just like the previous case Agip officials came secretly to attempt to stop the leakage but was overwhelmed by the pressure. You can imagine the quantum of oil that has gone in the creeks given the number of days of leakage from October 8 “, he said.

He notes that Ikuiku is an area where women go and harvest periwinkles, adding that the youths who hitherto engaged in fishing in the area had suspended their vocation due to the pollution of the area and are angry over the development.

While calling on the National Oil Spill Detection and Response Agency (NOSDRA) to intervene in the management of the spill incident, he adds, “I clearly understand the anger of the youths because the company which provides power in the community has not provided power to the community in recent times.”

Eni has, however, confirmed the incident and regretted that its response since the incident was hampered by denial of access by the host communities.

“Preliminary findings show that the event is a minor spill, estimated in less than two barrels and containment measures have been deployed. However, community disturbance linked to issues of land ownership involving multiple communities has been delaying our access to the area and therefore direct physical intervention.

“Regulators and authorities have been duly informed and we are continuing to engage the community to get access to the area”, the management of the Italian oil major said.