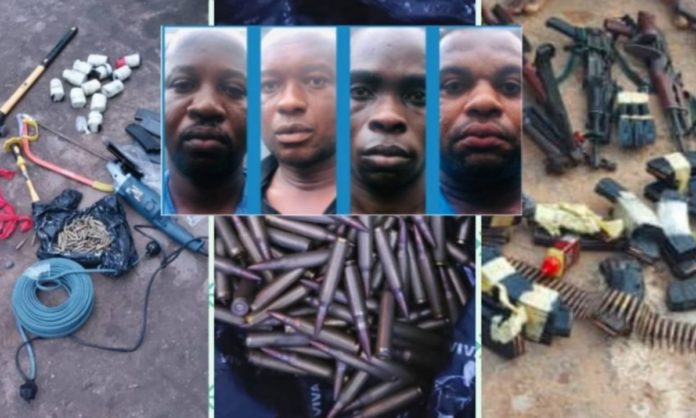 The serving soldier, Sergeant Ayeni Samuel is a native of Ilesha in Ilesha South LGA of Osun State while Corporal Emeka Harrison who was dismissed from the Nigerian Army in 2015, is from Nsukka in Nsukka East LGA of Enugu State.

Among the rest of the gang arrested were the mastermind, 37-year-old Emeka Iloh, a native of Igwachi in Oji River LGA of Enugu State who is resident FH Estate, Kubwa, FCT, the informant, one Abuchi Elijah AKA ‘Chime d mosquito’ aged 27YRS, of Isialangwa LGA of Abia State but resident in Bonsac Area of Asaba, Delta State and 38-year-old Ibanifiroi Ekiene of Tombia Community of Degema LGA of Rivers State.

Others are 46 year old Sunday Soyemu AKA Sunny, a native of Alegnene in Ekeremor LGA of Bayelsa State and Alfred Robinson aged 45, of Gelegele town in Ovia North LGA of Edo State.

The gang had on the 29th of July, 2020, robbed a bullion van conveying money and other valuables in Abakaliki, Ebonyi State Capital.

In the cause of the robbery incident, four policemen were killed and many others injured.

Following the attack, a serious manhunt was launched by IRT detectives with technical Intelligence support and Alfred Robinson was first arrested.

It said, “recovered from the 6 hoodlums arrested on Sunday, 2nd August 2020, who came from the various axis of the south-south/south-east, with intent to perfect a planned bank robbery in Asaba this week include a Lexus 350 Jeep with Lagos Reg no AGL 267 FN.

The Police said all the suspects upon interrogation confessed to the Bullion Van Robbery in Ebonyi State and many other armed robberies and kidnappings across the Southeast and South-South.

The statement noted that the suspects also confessed that 4 out of the Rifles recovered belonged to the Policemen they killed during the Bullion Van Robbery in Ebonyi State.

It said the suspects are assisting police to arrest the remaining gang members.