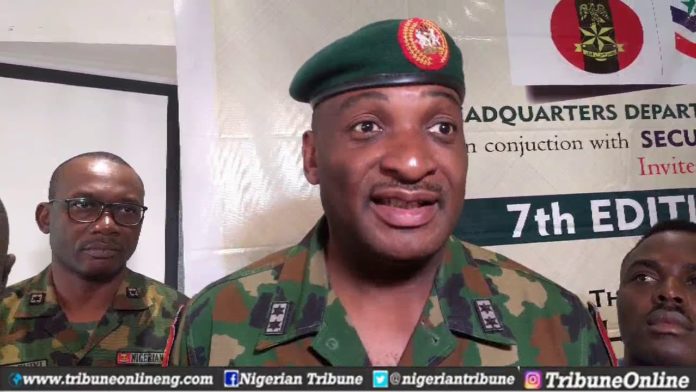 The Nigerian Army says it is high time Nigerians began to separate criminality from ethnicity.

Chief of Civil-Military Affairs of the army, Major General US Mohammed, made this call while speaking at a public book reading organised by the Military Writers Society of Nigeria (MWSN) at Samuel Bill International Academy, Utako, Abuja.

According to the army chief, ‘’crime has to do with the intent of the person, not the ethnicity.

“It is wrong to say a particular ethnic group are killers, thieves or in general criminals. Everybody should be accountable for their actions and not drag the entire ethnic group into it”

“I enjoin Nigerians to stop stigmatisation because at the end of the day we only have one common enemy which is a crime.

“The faster we can live in peace as a nation, the better for us and the generation to come”.

Students of the school were however thrilled by the book: Diary Of A Peasant Child which the organisers purchased for them.

The author of the book, Usman Dauda Abdulkareem, personnel of the Nigerian Navy, said at the occasion that the Almajiri system is still one of the leading causes of insurgency in Northern Nigeria.

Abdulkareem said a survey by the Vanguard In November 2019, revealed that children as young as four years are taken from the loving comfort of their parents and sent to faraway places where they are placed under an Islamic teacher (Mallam) to learn knowledge about Islam and Islamic religion.

‘’Most times, the Islamic teachers begin to lose count of the children and push the children to fend for themselves making them useless and a burden to the society.

Continuing, Abdulkareem says, ‘’I want to tell the world about the Fulani tribe and encourage northern states and leaders to put heads together, through the Northern Governors Forum, to tackle the Almajiri system.’’

The essence of the public reading of Abdulkareem’s novel at the school was to inspire young people to take education more seriously.

“The inspiration is to deliver a message to the direct target audience. I’m trying to tell the world about some issues happening in Nigeria especially the Almajri system and lack of education from the Fulani people.

‘’My novel is talking about discouraging the Almajiri system because it has been discovered that some of the Boko Haram insurgents, and other bandits are products of the Almajiri phenomenon.

“Since they wasted their teenage years on street begging without education or skills to set them up in life, they have resorted to terrorism for livelihood which is not a good step to take”, the author, himself a Fulani said.

Also speaking, Chairman of the Governing Council of the MWSN, Dr Mohammed Sani Abubakar, says he believes the novel will bring about cultural tolerance in Nigeria.

“I believe the book will help us understand one another’s culture, and it will give a better perspective of the culture for those who don’t know”, he says.

‘’Cultural and religious tolerance has been one of Nigeria’s biggest issue, promoting peaceful coexistence in a religiously plural society like Nigeria is not easy so it’s important for us as a people need to tell our cultural stories.

“When we understand our differences, we would have harmony and it would help us live in peace”, Abubakar adds and accordingly advised parents to encourage their children to go back to the traditional means of reading other than using gadgets.

“Reading should not be an option, parents should control the screen time of their kids, children should read not just things online but the traditional books we know”, he said.

The principal of the school, Joshua Abba, expressed gratitude to MWSN and the author for making it possible for his students to have copies of the book.

“I am most grateful to MWSN and the author for finding us worthy to have a taste of the book, it is said that ‘to hide something from an African put it in a book,’ I am happy they are changing that perception”

“Although social media a modern technology is taking away the traditional reading culture I’m glad major institutions are taking measures to let the kids read from a book”.

“The author is a big inspiration to the children, with the tedious job he writes for posterity, history and most importantly responsible entertainment for kids” it’s inspiring’’, says the principal.

He encouraged parents to focus more on their kids and books than social media or rather engaged the children in educational materials on the internet.

While encouraging book reading, he pleaded with the government to increase the budget for education.“I want to thank the Kaduna State Governor, Nasir El-Rufai who has taken the lead by giving a large chunk of the budget to education”