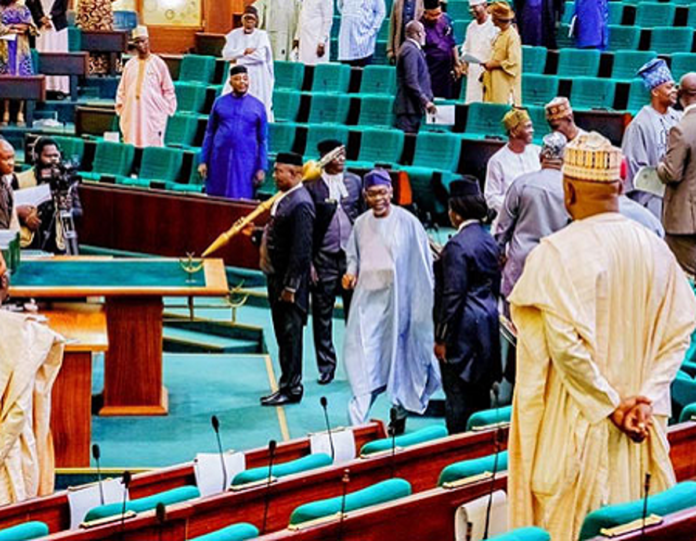 The green chamber turns into a rowdy arena after the motion was introduced as the majority of the lawmakers murmured, until the Speaker, Femi Gbajabiamila, hit his gavel on the table to call them to order.

The Speaker then asked the Deputy Majority Leader, Akpatason Peter (APC, Edo) to second the motion.

However, based on the mood and expression of the lawmakers, the Speaker asked that the motion be stepped down temporarily.

The minority leader, Elumelu Ndudi (PDP, Enugu), who read from the mood of the House replied that his microphone wasn’t working.

The motion was later seconded by Hon. Tajudeen Yusuf (PDP, Kogi).Amidst the rowdy session, the Speaker called for a voice vote for the consideration of the motion, as the majority of the lawmakers shouted “Ney”.

Defying the “Nay” sayers, the Speaker pleaded with the House to allow the mover of the motion to re-read the title, content, and prayers of the motion.Reading the title for the second time, the mover, Hon. Kalu (PDP, Abia) amended it saying, “Urgent need to quarantine and evacuate stranded Nigerians from the People’s Republic of China”.

He also read the content and prayers of the motion but the lawmakers rejected the motion for the second time.

The lawmakers cited the reason that China has better facilities to handle the outbreak of coronavirus then Nigeria.

Speaking on the matter, Ossai Nicholas Ossai (PDP, Delta) argued that there is no point for the Nigerians in China to be brought back in the midst of the coronavirus epidemic as their host nation (China) has better facilities to contain the disease than Nigeria.

It could be recalled that the Chinese Ambassador to Nigeria had said that there are many Nigerians in China currently with about 65 in Wuhan, the epicenter of the coronavirus epidemic.