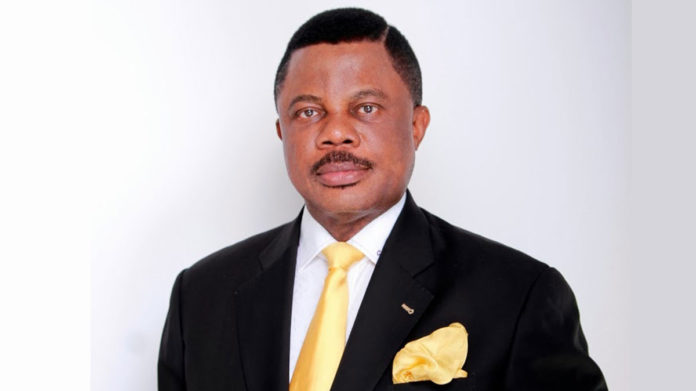 On August 8, 2020, the Governor of Anambra State, Chief Willie Obiano, clocked 65 years. Obiano, a chartered accountant and seasoned banker turned politician, is believed to have contributed greatly to the sustenance of democracy in Nigeria and made a significant impact on the lives of Anambrarians.

When he joined the governorship race on the platform of All Progressives Grand Alliance (APGA) in 2013, he was regarded as a tenderfoot in politics. That was, however, never an issue to the Anambrarians as they saw him as the right man for the job. He easily won the election and was inaugurated on March 17, 2014. He got re-elected and was sworn in for a second and final term on March 17, 2018.

Considering his professional background as a financial pundit, who had worked hard to earn his stripes, many had no doubt that he was better positioned to ensure the effective and prudent management of the state’s finances for the benefit of the people. As he marked his 65th birth anniversary last Saturday, there were testimonies that he has indeed restored hope and brought joy to the people of Anambra State with his laudable achievements that are visible for everyone to see. It is a widely held view that the governor has lived up to the expectations of Anambra citizens.

Governor Ifeanyi Okowa of Delta State is one of the many Nigerians with the total conviction that Obiano has made considerable efforts towards ensuring the overall development of Anambra State.

In a statement issued to congratulate Obiano on his 65th birth anniversary, Okowa, a member of the Peoples Democratic Party (PDP), extolled him for his political strides, describing him as an astute administrator, renowned technocrat and an excellent leader with an impeccable passion for development.

Okowa said: “He (Obiano) has continued to blaze the trail, especially in the spectacular performance of his administration’s four-pillar programme of Security, Agriculture, Youth Empowerment and Education. Your Excellency, let me commend your administration and the good people of Anambra for the peace and security in your state, which is why Anambra remains a centre for commerce in Nigeria. Your commitment to the growth and development of Anambra is commendable and worthy of emulation. The people of Anambra are indeed proud of your achievements, even as your administration continues to chart a new path of development and create a brighter future.

“I am pleased to join your family, political associates and other well-wishers in thanking God for blessing you with the strength and wisdom to live a life of honesty and commitment to the well-being of Anambra people. It is our prayer that God will continue to protect you and grant you good health to render more services to mankind.”

The Speaker of the Anambra House of Assembly, Rt. Hon. Uche Okafor, noted that Obiano has done both Ndi Anambra and APGA proud through his unprecedented development-driven programmes and pragmatic approach to governance.

In his goodwill message to the Anambra helmsman, Okafor observed that Governor Obiano has used his professional training as a notable Accountant in achieving prudent management and judicious utilization of the state’s resources for the good of the people.

The speaker recounted Obiano’s accomplishments in all sectors of the state economy while hailing him for being the first Anambra Governor to take development to the hinterlands via his revolving twenty million naira Community Chose Your Projects Initiative which is said to be in the third stage at the moment.

While wishing Obiano many more eventful years ahead and applauding his wife, Ebelechukwu, for the complementary roles she is playing towards the entrenchment of good governance in the state, Okafor prayed God to continue to strengthen the governor for greater feats and exploits.

Former Central Bank of Nigeria (CBN) Governor, Professor Charles Soludo, also rejoiced with Obiano on his birthday. Soludo declared that at 65 the Anambra governor has lived a fulfilled and impactful life. Describing Obiano as a distinguished national leader, the ex-CBN boss said the governor has touched millions of lives. He asked God to grant him long life as he continues to give his best to the service of humanity.

James Eze, a poet and media expert, is the Chief Press Secretary (CPS) of the Anambra State governor. In a special piece on Obiano’s 65th birth anniversary, Eze examined some of the indelible marks the governor has recorded in his determined push to lift Anambra to an enviable height.

In the words of the CPS, “For someone who was not a career politician before he ventured into politics, Obiano has handled the challenge of political leadership with the purposefulness of a private sector titan. He has applied himself to the rigor of diagnosing the most painful ailments of Anambra State and came up with effective prescriptions for them. He has looked at the competitive advantages of the state and decided to play to its strengths. He has restored the dignity and pride of Ndi Anambra.”

In the area of security, Eze maintained that “Governor Obiano’s campaign for a safe and secure Anambra has made all the difference. It has chased many violent criminals away and reduced crime in the state to a policeable proportion. It has wiped away the once crushing fear that made many people spirit away their ageing parents from villages to safety. It has returned confidence in the business environment and attracted investors to the state. It has placed Anambra on the continental security map. As a result, Obiano has won the prestigious award of the Icon of Security in West and Central Africa and the Best Governor/Premier in Security Architecture in West and Central Africa. That is a complete turnaround story.”

He further stated that “there is probably no better sector where Obiano’s impact is felt as in the education sector. Barely one year after he assumed office, Obiano had sent 28 teachers on offshore training to Singapore. The idea was to equip the teachers with the relevant knowledge they needed to bring Anambra children at par with their peers across the world. It was the first time any political leader would do anything like that in South-East Nigeria. That gesture proved to be the catalyst needed to induce positive change in the education sector of the State. Consequently, in 2015, 37-year old Rose Nkemdilim Obi won the maiden edition of the Maltina Teacher-of-the-Year Award. Two years later, Clement Okodo who teaches at Central School Abagana won the Best Teacher in Nigeria award. A bigger success followed two years after when Anambra teachers won four awards at the President’s Teachers and School Awards for Excellence in Education organized by the Federal Government in Abuja. These are a clear indication of the quality of teachers that populate schools in Anambra State under Obiano. They also explain the sustainable performance of Anambra State in education and production of knowledge.

“The outcome of Obiano’s investment in education has been outstanding. The greatest of them was the Gold Medal won in August 2018 by five school girls from Regina Pacis Secondary School Onitsha at the World Technovation Fair in the Silicon Valley, San Francisco, USA. It was the first time some schoolchildren from Africa would defeat their fellow school children from the USA, China, Spain, Uzbekistan and Turkey in any innovation contest. To prove that the Technovation performance was not a fluke, less than one year after the Silicon Valley feat, four boys from St John’s Science and Technical College Alor won the Bronze Medal at the International Festival of Engineering, Science and Technology in Tunisia defeating countries like Canada, Italy, Sweeden, Ukraine, Malaysia, Brazil, South Korea, Turkey, China, Bosnia Herzgovina, Indonesia, South Africa and Tunisia. The boys won the Bronze Medal with a device they called Adaptable Alternative Power Supply for Sub-Saharan Africa. Before that, Anambra school debate team had also won laurels in Singapore at the World Schools Debate Championship. It is therefore factual to say that under Obiano, Anambra’s academic performance has gained global dominance. Willie Obiano will be remembered for all these achievements.

“Obiano’s thirst for conquests also added yet another chapter of excellence to the Anambra narrative. His unwavering focus on Agriculture created a new window of success for the entrepreneurial gift of Ndi Anambra. From a miserly 80,000 metric tons of rice per annum that Obiano met when he assumed office, Anambra has become a reference point in rice farming in Nigeria with a production output of 345,000 metric tons at the moment. The state also has some of the most modern integrated farms in Nigeria. Anambra has also become the center of food processing in Nigeria with ultramodern rice mills in Igbariam, Amichi, Ufuma and Umumbo. Lynden Integrated Farms in Igbariam which came into existence from a partnership between the state and some indigenous investors is the largest poultry farm in South East and South-South Nigeria.”

There was no elaborate celebration for the governor’s 65th birth anniversary. He had earlier announced through his Commissioner for Information, Mr. C. Don Adinuba, that himself and his family would simply mark the day with prayers and a private mass to thank God for the abundant blessings and robust health He has granted him. He told those who were planning to celebrate his birthday and place advertisements in the mass media to donate the monies for such to the foundation which caters for people with mental health problems at a special home in Nteje, Oyi Local Government Area of the state.

The Governor felt that with COVID-19 still terribly threatening the world, this period called for sober reflection rather than merrymaking. According to him, “Covid-19 has caused deaths in their hundreds of thousands across the globe, inflicted severe health challenges on many more people, caused businesses to collapse and cost millions of people their jobs and billions their most cherished relationships. Ndi Anambra are not free of this phenomenon.”