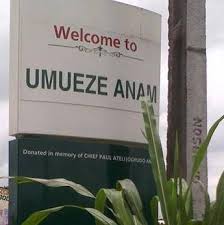 Umueze Anam community in Anambra West Local Government Area of Anambra State has written the Governor of Anambra State, Willie Obiano, stating reasons they feel the setting up of a caretaker committee for the community, was ill-informed and should be reversed.

A circular signed by the Anambra State Commissioner for Local Government, Chieftaincy and Community Matters, Greg I. Obi, dated May 22, 2020, had declared government approval for the constitution of a caretaker committee for Umueze Anam.

The government memo had directed the 8 man committee to bring lasting peace to the committee as well as resolve all issues thereby paving way for the establishment of a constitutionally elected President General of the town union and town union Executives.

However, in a letter to the governor dated May 27, 2020, the community represented by four signatories from Umuava, Umuezumezu, Umuaneke and Umuebendu villages, alleged that six names out of the eight in the list of the caretaker committee were principal officers of an “indicted and disgraced Agunakwa-Nkiliko ruling age-grade” for mismanagement of the 20 million naira community choose your project fund.

The letter titled “Re-establishment of the caretaker committee in Umueze Anam: A Panacea to Anarchy,” read thus in part:

“Your Excellency, our attention has been drawn to a letter purportedly signed by the Hon. Commissioner for Local Government and Town Union matters setting up an 8-man Caretaker Committee for the administration of Umueze Anam community. We view this letter and the intended action (appointment of Caretaker Committee) as an invitation to anarchy in Umueze Anam Community which presently enjoys peaceful co-existence.”

The Community said it is making the above submission premised on the following reasons:

“1. Between 2013 to 30th December 2019, the administration of Umueze Anam was under the leadership of Agunakwa-Nkiliko Ruling age-grades which in our culture and tradition represent the town union.

“2. On 30th December, 2019, the general assembly of Umueze Anam Community presided over by the Council of Elders, removed Agunakwa-Nkiliko Ruling age grade and replaced them with Oganiru-Akwuloto age grade to continue the administration of the community as the new ruling age grade.

“3. The removal of the Agunakwa-Nkiliko age grade was largely due to their mismanagement of the Twenty Million naira choose your project fund given to the community by the Anambra State government.

“4. Of interest is the fact that principal officers of the indicted and disgraced Agunakwa-Nkiliko ruling age grade (six of them) have their names listed as members of the purported Caretaker committee. One then begins to wonder if the intent for setting up this caretaker committee is not all about concealing the mismanagement of the 20 million naira given to Umueze Anam and other misappropriated funds from sales of community land.”

The letter, therefore, prayed the commissioner to withdraw the letter setting up the caretaker committee, probe the utilization of the second 20 million naira given to the community and always consult major stakeholders of Umueze Anam before any decision affecting the community is taken.