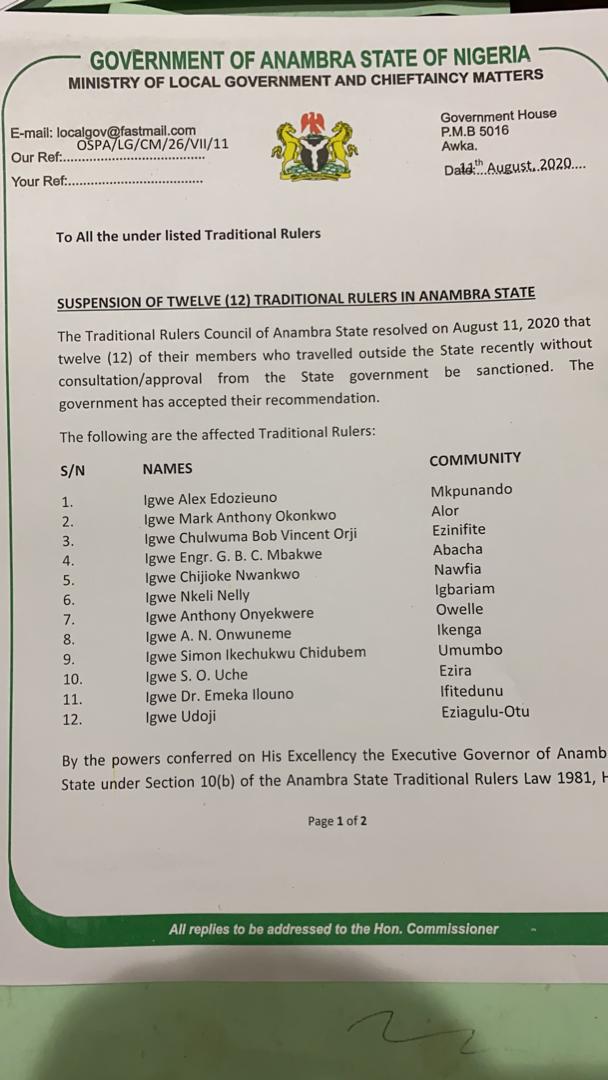 Anambra State Governor Willie Obiano has slammed one-year suspension on 12 Igwes who went on a trip to Abuja allegedly without consultation or approval from the State Government.

The suspension of the traditional rulers followed the recommendation of the Anambra State Traditional Rulers Council after their meeting at Prof Dora Akunyili Women Development Center Awka on Tuesday which centred on the public conduct of the 12 Monarchs that has been generating negative reviews in the media in the past one week.

The Anambra State Traditional Rulers Council led by the Obi of Onitsha, Igwe Nnaemeka Achebe had strongly condemned the trip by the traditional rulers to Abuja in the company of Oil magnate, Arthur Eze.

The Council had faulted the dissident traditional rulers for violating the code of conduct prescribed for their office, by leaving their respective domains without notifying either the state or their respective local governments.

The statement said the suspension took effect from Tuesday, August 11, 2020.

It also revoked their membership of Anambra State Traditional Rulers Council and cancelled any appointment they may be holding in government committees until the suspension is lifted.

“The suspension may be lifted at the end of one year, renewed or upgraded in the intervening period depending on government’s review of the conduct of the errant royal fathers,” it said.

It would be recalled that the Traditional Ruler of Ukwulu, Igwe Peter Uyanwa had similarly been suspended for similar misconduct the previous week.