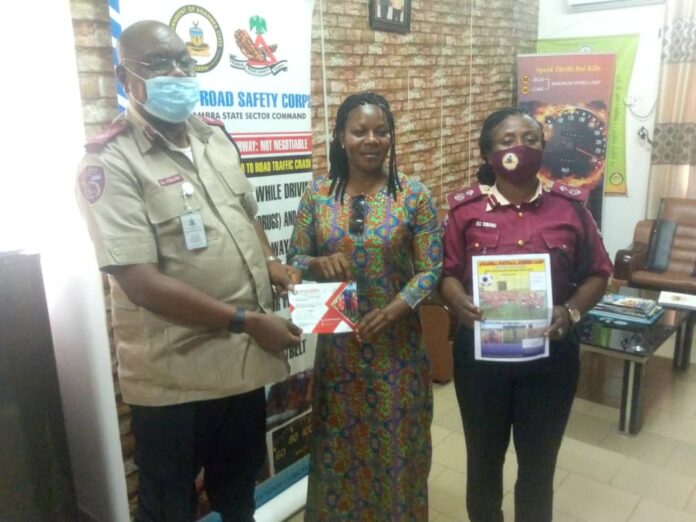 Awka – The Anambra State Commander of the Federal Road Safety Corps, Mr Andrew Kumakpayi has thrown his weight behind the forthcoming Anambra football Kiddies Camp with Maureen Mmadu.
Kumapayi while receiving the initiator of the project, Ambassador Maureen Mmadu in his office in Awka, said the project being the first of its kind, deserves all the support it can get to ensure it turns out successful.
The project is a football talent hunt for young girls aged between 10 and 15, with the aim of building capacity in female football and reviving their interest in the game.
The talent hunt tagged Anambra Football Kiddies Camp: Discovering The Next Super Falcons,” seeks to gather 300 talented or interested youths who would be in a camp between Dec. 19 and Dec. 23, 2020, for intensive on and off field training and mentorship.
The Anambra FRSC boss urged parents to avail their children the opportunity to participate fully in the holiday camp billed to take place at Onitsha.
“I want to assure you that the command will provide resource persons who will take the children on road safety tips and education as part of its sensitization campaign. This is a laudable project and we will give it every support we can to make it successful,” Kumapayi said.
Earlier in her speech,  Ambassador Maureen Mmadu said the project is her own way of giving back to the society and helping young girls achieve their dreams of playing football.
According to Ms Mmadu,  the project will provide a smooth platform for the girls to pursue their dreams which she never had.
Mmadu, who has had a record 101 national caps in her career, one of the highest in Africa, said her desire was to have as many females as there were males in football so that they too could benefit from the fortunes and fame the round leather games could offer players.
“I have played football at the highest level. I have played for European clubs where I also worked as Coach developer but now I want to give back to Nigeria, particularly Anambra where it all started.
“I want to build and develop female football. I want 300 girls of ages 10 and 15 for an intensive training camping,” she said.