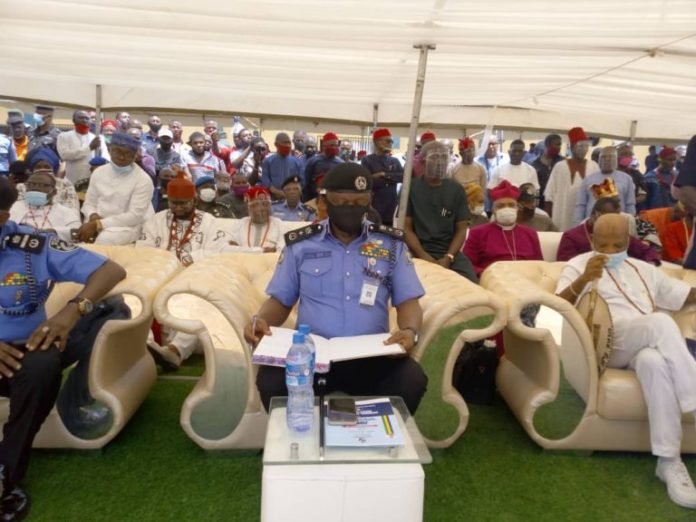 The 13th Zonal Command of the Nigeria Police Force was on Wednesday inaugurated in Ukpo in Dunukofia Council Area of Anambra State.
The Inspector-General of Police, Mohammed Adamu performed the inauguration.

The Zone 13 will be in charge of Anambra, Ebonyi and Enugu states, and will be headed by AIG Mohammed Danmallam.

However, neither the Anambra State Governor, Willie Obiano, in whose domain the Command is domiciled, nor his Enugu and Ebonyi Counterparts, Ifeanyi Ugwuanyi and Dave Umahi, whose states fall under the zone, were present at the event.

There have been insinuations that Governor Obiano had disagreed with the choice of Ukpo as the location for the Zone, which many at the ceremony felt may have been responsible for the physical absence of the governors.

Speaking at the Inauguration, Adamu, who was represented by Deputy Inspector-General of Police, Celestine Okoye said the new zonal command was an addition to strengthen the existing security in the South-East geopolitical zone.

The IGP observed that though there were arguments over the supposed location of the zonal command, Ukpo met every requirement as it was within the state capital territory.

He poured encomiums on Chief Arthur Eze, an oil mogul who not only supported the police in actualizing the project but also worked with the people of Ukpo to provide and renovate the temporary operational base.

“Misunderstandings came up, people who did not understand were made to understand that Ukpo was part of Awka Capital Territory, and it is being commissioned today,” he said.
The IGP also ordered that the MOPO Base sited at Nsugbe, Anambra East Council Area of the state should become functional.

According to him, this is in response to the cry of Nsugbe people, urging them to prepare the ground for the police to move in as soon as possible.

In his remarks, the Zonal Commander, Damallam thanked the IGP for appointing him to head the zone and promised to work for greater peace and security in the states under the zonal command.