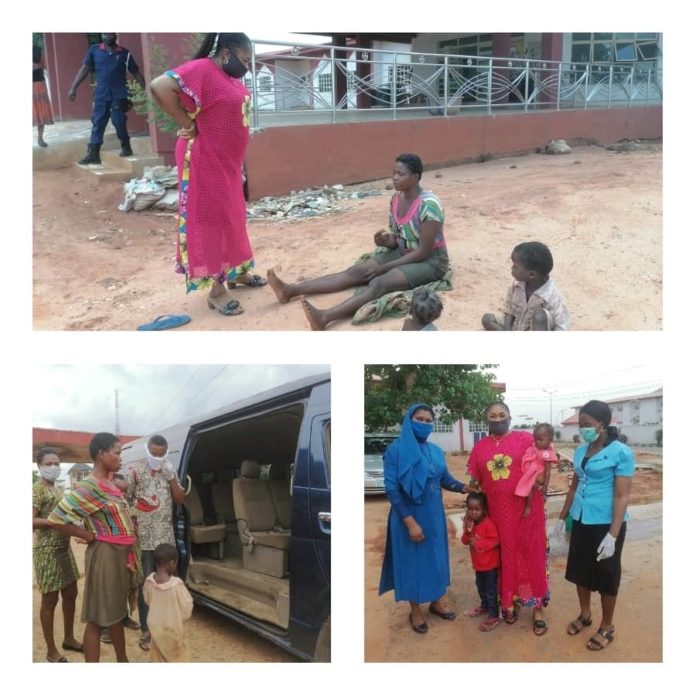 A mentally-deranged woman and her two infant children have been rescued and provided succour by the Anambra State Commissioner for Women and Children’s Affairs, Mrs Ndidi Mezue.

The Commissioner picked up the woman and her two children, a boy and a girl, at Ufuma Junction, Orumba North LGA, Anambra State, after two weeks of intensive search for the woman.

Following a tipoff from a concerned citizen, who alerted on the terrible condition of the trio, Hon Mezue and her team had swung into action and with the assistance of Ufuma Vigilant Group rescued the woman.

Following the rescue, they were cautiously relocated to Awka, cleaned up and subsequently resettled in a government-owned facility, to be rehabilitated and reunited with their family and the society.

Speaking on the operation, Hon Mezue Said the Ministry has sustained efforts at ridding the streets of mentally-challenged persons so as curtail nuisance on the streets.

Mezue explained that the woman has been taken to a government facility for mentally challenged persons at Nteje while her children were taken to the state-owned motherless babies’ home.

“Actually I got a distress call from a concerned citizen and we immediately went after the woman. Thank God the woman is now safe at the facility at Nteje. The facility has qualified medical doctors who take care of these mentally-challenged persons. We have volunteer workers under that facility too,” Mezue said.

The Commissioner explained that the facility had about 100 inmates but many of them have been discharged and reunited with their families after they were certified okay by medical doctors.

She commended the massive support and partnership the Ministry has enjoyed from Caring Family Enhancement Initiative, (CAFEI), the Pet project of the state governor’s wife, Mrs Ebelechukwu Obiano, saying that the partnership has made their job seamless.