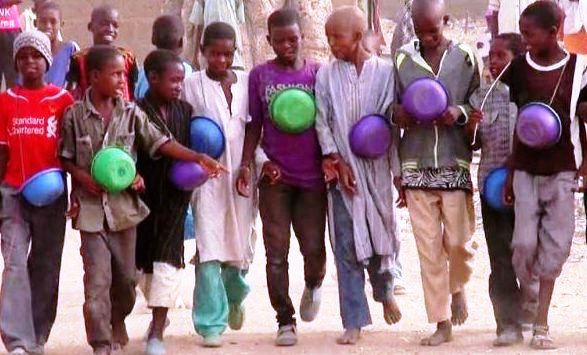 Over the years Almajirinci is an Islamic educational system commonly practised in Northern part of Nigeria. Almajiri is a Hausa word derived from the Arabic word Almuhajirun, meaning migrants. In Northern Nigeria, it refers to persons who travel far from home in search of Islamic knowledge. Over 80% of almajiri in Nigeria is predominantly found in the North with a considerable population in the Southwest of the country too. Almajiri schools are also called Makarantun Allo (Slate School), Tsangaya (Learning Centre in Hausa) and Ile-kewu (Arabic School in Yoruba) depending on the context of the usage. The practice to a large extent has not provided answers to the questions it sought to ask for a long time. It has more often than not exposed children of the poor to societal vices and dangers associated with such harsh realities of life. These kids are unhappy, sickly, un-kept, maltreated, accommodated in filthy-non-ventilated rooms and environment. The mallams (teachers) are more or less religious businessmen and shenanigans who front the children to achieve their sinister motives and unfortunately hoodwink the public to fulfil the purpose of almsgiving which is one of the pillars of Islam. They give the children out in slave labour to anybody who can afford the bill and force them into doing all sorts of menial jobs. These children are made to trek long distances to farms and work, while their mallams reap the fruit of their labour with bountiful rewards and cash lining their pockets. Their teachers hardly bother or enquires how they fare. There is no platform for complaints, questions and feedback. Woe betides you who dares to raise questions on welfare. Merciless Horsewhip for you.

One day, I had pulled over at Gwargaje along Kaduna-Zaria Express on my way back to Kaduna to buy water after a hard and torturous day at the office when pronto, the almajiri flocked like locust around me rendering their usual soundtrack. After my transaction, I noticed one handsome, humble lad among them named is Sahabi. Sahabi was battling with a middle ear infection also known as acute otitis media. It is common, particularly found in children. Otitis media is often caused by a bacterial or viral infection affecting the middle portion of the ear. Common symptoms include: pain, pus or drainage, difficulty in hearing, loss of balance and fever. His condition did not seem to bother him other than picking the available crumbs from the rich man’s table and make good returns in collected alms for his mallam or face the dire consequences of his ‘stupid’ action. There was no effort put by their mallam to resolve his health issue. The shepherd did not know that one of his sheep was sick. I wrote my name and position on a piece of paper, handed it over to Sahabi, described my office then at Danmagaji Zaria which he and his colleagues knew and told them to come over the following day for us to find a medical solution no matter how small to his problem. That was the last I saw Sahabi. He never showed up. I saw in Sahabi a future leader consigned to culture and tradition which has denied him the opportunity to reach his God giving potentials. Many Sahabis are roaming the streets of the North and now other cities in the south in an unending cycle of poverty, ignorance and uncertainty. The almajiri system feeds the political, traditional, religious and various structures of the most powerful in the region. I have my dumbest doubt that the systems will be eradicated or even reformed because it is a ladder to political ascension and prominence, religious, traditional and other sinister motives. Almajirinci simply thrives on the back of ignorance and failed family values.

Many have raised their voices against the practice maintaining that it is against the right of the children to parental care. Others blame parents for foolishly abdicating their responsibility to the public. The former Governor of Central Bank of Nigeria, Sanusi Lamido Sanusi is an ardent critic of the system. His views kept him on a collision course with many and unsettle those who benefit from the status quo. In one of his vituperations against the system he said; ”we speak of the Almajiri problem as if the almajiri is the problem when we, in fact, know that the problem is with the irresponsible fathers who leave their children on the streets. If you are too poor to take care of your children, it means you who should go and beg, not the children. ”But if anyone doesn’t provide for his own, and especially his household, he has denied the faith and is worse than an unbeliever. I Timothy 5:8. The Quran also admonished parents to take care of their children thus; O you who have believed, protect yourselves and your families from a fire whose fuel is people and stones

” Quran 66:6. Ironically, Sanusi is a known beneficiary and product of the environment and system and the practice he publicly vilifies. It is hard to fathom the sense a man who cruises in Phantom Rolls Royce makes of a system the cost of one of his automobiles could positively address to a large extent. Hypocrisy! The elites (political and religious), feudal system and oligarchical practices stand in the way of growth and progress of the northern and almajiri reforms if there is anything like that. Illiteracy and poverty are also factors breeding the practice. Blind trust and belief in mallams word as the teacher and purported knower of Quran is another. Unfortunately, another game plan is the elitist disposition to perpetually subjugate and impoverish the poor by supporting Makarantan Allo for the poor while their children acquire the best of western education.

The government of Goodluck Jonathan had a good intention for the almajiri but not northern leaders. About 165 almajiri schools were built to accommodate over 10 million out of school children especially in the north to help mainstream the system into basic education. The project which was estimated to have cost 15 billion naira has been abandoned by the state northern state governments. To make matter worse, the vibrant and outspoken northern cultural, political and Islamic leaderships have turned dumb on the issue. One could smell a rat in the loud silence prevailing in the non-implementation of the programme since 2015. The almajiri school programme was the best gift to the average poor northern Nigerian child. At the moment, the schools are overgrown with weeds and offer free accommodation to hoodlums, insects and reptiles. Northern leaders must be ready to take responsibility for their actions and inactions as it concerns the schools. They have failed. They can fool some people for some time but not all the people every time. They should support the already established almajiri schools as the only way forward. With the rising wave of Corona Virus pandemic and the understanding among Northern governors to repatriate almajiris to their states of origin, the much-expected end to the practice seems near than one had imagined. Governor Nasir El-Rufai has announced an end to the practice in Kaduna. Only time shall tell whether those concerned will comply with the government directives. Almajirinci is a time bomb waiting to explode. If it is not urgently addressed, Boko Haram, kidnapping and other ills bedevilling the north will be a child’s play. And the adverse ripple effect will surely manifest negatively in the entire nation. The effect of a Nigerian popular pigeon English parlance which says, ‘one day, one day monkey go go market e no go return again should not play out in the North.

Sunday Onyemaechi Eze, a Media and Communication Specialist is the publisher: thenewinsightng.blogspot.com. He wrote via sunnyeze02 @yahoo.com and could be reached on 08060901201