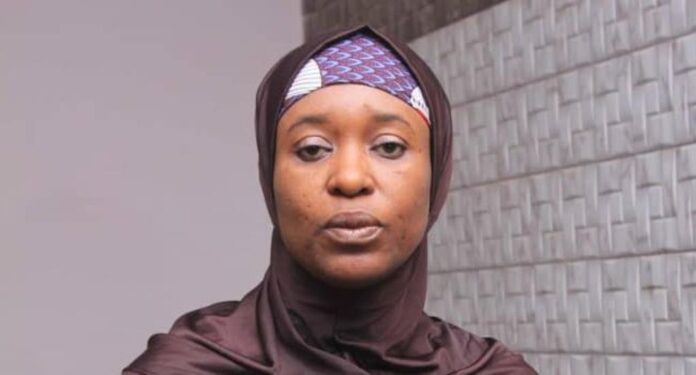 The eventualities of the #EndSARS protests which rocked the nation for over two weeks have made Aisha Yesufu a household name. This is because of the instrumental role she played and still playing to ensure the demands of the protesters who are clamoring for an end to police brutality and bad governance are met.

Yesufu who was born on 12 December 1974, is a Nigerian socio-political activist, and co-convener of the Bring Back Our Girls Movement, an advocacy group that brings attention to the abduction of over 200 girls, from a secondary school in Chibok, Nigeria, on 14 April 2014, by the terrorist group Boko Haram. She hails from Agbede in Etsako West of Edo State and she is a Muslim.

From age 11, she has always been known in her family to speak against things that do not go down well with her and though this earned her the ‘stubborn’ tag, it also propelled her towards her journey to becoming an Activist.

She first came to the limelight following her unflinching commitment to the Bring Back Our Girls Movement and since the inception of the movement, Yesufu has organized and led over a hundred protest marches in Nigeria, demanding social justice, respect for the rule of law, respect for democratic norms and Nigeria’s constitution, an end to endemic corruption and political persecution of dissidents. She has endured persecution by security agents and other government agencies for these actions, but she believes that Nigeria is worth fighting for.

Her unflinching commitment to the lingering #EndSARS protest has further earned her the respect of many Nigerians and many have tagged her pictures as ‘the Nigerian statue of liberty’. 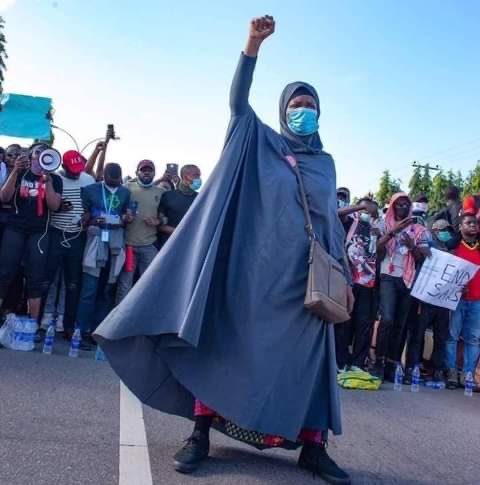 On the 10th of October 2020, 45-year-old Aisha beat all odds, tear gas, and police harassment to lead the EndSARS protest in Abuja and has remained at the forefront of the movement.
Narrating her ordeal, Yesufu on her Twitter, wrote: “I am okay. I refused to run. I walked with my fist high up and @PoliceNG were all shooting at me as I walked away. I came out of the fence they cowardly built around themselves and about 4 of them came at me at the junction throwing bottled water this time.”

“One of them had pushed me and the raised hand might be what some saw as a slap. No, I wasn’t slapped and I refused to cower and I turned and gave them a piece of what I thought of their pathetic selves and if I am going to die, it would be with my fist high up and my mouth open,” Yesufu said.

In the face of adversities, Yesufu, who has repeatedly noted that she is not afraid of death, wrote “As a little girl less than 10 years of age, I came to the conclusion that: the worst thing anyone can do to me is to kill me and that it is not the worst thing since I am going to die anyway. At 46, you think I am going to be afraid to die? Try again! WE DIE HERE!”

Yesufu whose utmost desire is to see Nigeria become a country where ‘’the son of a nobody can become somebody without knowing anybody,” had once said “I would never give up on Nigeria no matter what it throws at me. I owe it to unborn generations on their way to Nigeria and I will continue to fight for Nigeria just as I wished others had fought for me before I came to be Nigerian.”

She also said, “I want a level playing ground for everybody where the woman who sells groundnuts or is frying akara or the motorcyclists that are working hard to send their children to school should be able to get jobs based on their capacity and ability and not on who they know.”

However, a lot of people particularly Kannywood stars have decried her saying Islam does not support protest and that she has committed sin. Most of her critics who took to social media to lambast her called for the death of the activist.

“They are calling for my arrest and that all Muslims should denounce me. In other words, kill me if they see me.”

What do you make of the calls to crucify Yesufu over her advocacies? Let’s hear from you in the comment session.