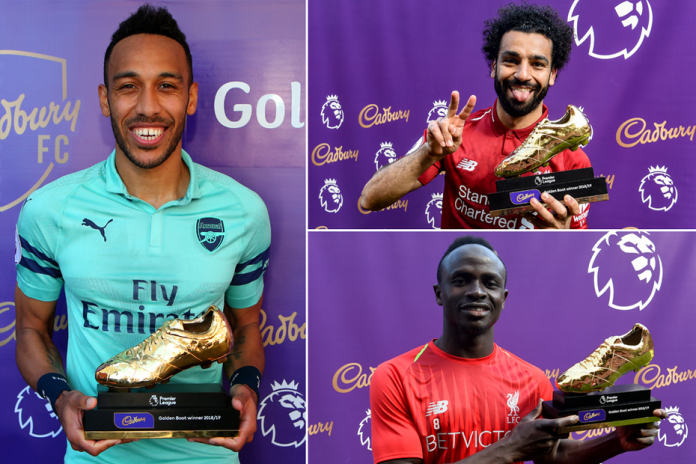 The African trio of Sadio Mane, Pierre-Emerick Aubameyang and Mohamed Salah shared the Golden Boot as the Premier League football season came to a close on Sunday.

Gabon forward Aubameyang scored twice for Arsenal at Burnley to join Salah and his Liverpool teammate Mane, who netted a final-day double against Wolves, on 22 goals for the Premier League season.

Sergio Aguero, of champions Manchester City, was next in line with 21 goals.

Salah has now won the award two seasons in a row but this term’s winning tally was the lowest by players in English football’s top-flight since 2010/11 when Dimitar Berbatov and Carlos Tevez shared the Golden Boot with 20 goals apiece.

Aubameyang was delighted to be a member of an all-African trio of winners, saying in quotes reported by the BBC: “I share this trophy with two other guys I like, great players and African. We are representing Africa, that’s cool.

“My teammates knew about the Golden Boot, I said nothing. I did not want them to play and only focus on me. I am a team player.” He said.

For Liverpool manager Jurgen Klopp there was the satisfaction of knowing he had a played a part in the careers of all three of this season’s Golden Boot winners, having signed Aubameyang from Saint-Etienne in 2013 when he was in charge of Dortmund.

“Auba too? Do they have three boots?” said Klopp, who suffered the last-day heartache of seeing Liverpool finish just one point behind City.

“It is good. They are all my players,” the German added.

The 26-year-old is the sixth player to win the Golden Boot award in consecutive seasons.