International public concern on the grave humanitarian crisis in the North-East axis of Nigeria seems to be on the wane as the Boko Haram insurgency stretches on for its 11th year.

But, for Abdul, the conflict still evokes haunting images of loss and tragedy.  “Seven years ago, I lost an uncle during an attack in my family’s hometown, so I have seen first-hand the damage the conflict has caused”, he says.

Abdul who hails from the area has decided to help his community in any way he could after graduating in geology from the University of Maiduguri (UniMaid), in the capital city of Borno State, the epicentre of the Boko Haram crisis.

According to him, “I was inspired to join the humanitarian life by seeing men and women from all over the world coming here to play their part in alleviating the suffering of my people.”

About a year ago, he started working for the United Nations migration agency, International Organisation for Migration (IOM) to provide safe and clean water and sanitation to internally displaced people (IDPs) who have fled their homes in search of safety.

Since the start of the humanitarian crisis, Maiduguri has seen a large influx of IDPs so the water supply in the Borno capital has become overstretched.

“If you look at Abuja, a single individual there would probably have access to one hundred litres of clean water per day, whereas the average here is 15 litres”, he says when comparing the capital of Nigeria with Maiduguri, where he lives alongside over 800,000 IDPs. This is what drives Abdul to work as a humanitarian.

“There is a sense of genuineness in the smile of hope on the face of an orphan or a widow because of what I do, so this is a form of motivation. I do what I do knowing that I have an impact on other peoples’ lives”, he says.

The humanitarian situation in Nigeria is one of the largest crises in the world today, while the emergency response remains largely underfunded. As of July, aid organisations had received less than a third of the funding necessary to provide life-saving assistance to those who desperately need it.

According to IOM’s Displacement Tracking Matrix, 1.9 million IDPs live in the states of Borno, Adamawa and Yobe (BAY).

With the upsurge in violence and new waves of displacements, in the first half of the year, nearly 60,000 people were forced to flee their homes, some for the second or third time. Over 24,000 people are sleeping out in the open and more than 400,000 others live in makeshift shelters, exposed to harsh weather conditions, disease outbreaks and protection risks.

In addition to cholera and other diseases most common during the rainy season, the Boko Haram crisis is now compounded by the COVID-19 pandemic. Four out of five IDPs in the North-East live in overcrowded conditions, so physical distancing is impossible.

An outbreak inside camps could be catastrophic.

“I was just talking to one of the IDPs here in Stadium camp (Maiduguri)… She told me that she uses one mosquito net for her family, and now since people shouldn’t come together, she needs more mosquito nets for her to maintain distancing, and it’s difficult for her to have one.”

Abdul visits camps to ensure that facilities like showers, latrines, water points and boreholes are in good condition.

The 30-year-old is aware of the importance of his work in times of COVID-19, and the fact that water scarcity, though a constant challenge, is a greater threat to people’s lives these days.

Water, sanitation and hygiene provision are at the heart of the COVID-19 response. “You cannot tell people to wash their hands properly if they don’t even have the necessary water to survive”, he says.

Having regular conversations with the traditional leaders of those communities is also a crucial task. During his visits, Abdul makes sure to sit and listen to the grievances of IDPs and their perceptions of the virus.

“Some people here still don’t believe that COVID-19 is real… Millions of people are at risk if we don’t communicate properly.”

Poor access to water is one of the main challenges inside camps and host communities. According to the Humanitarian Needs Overview, in 2020 more than 600,000 people are in dire need of safe and clean water in the BAY states where attacks by non-state armed groups continue.

Recently, humanitarians like Abdul have been increasingly targeted. Since the beginning of 2019 alone, eight aid workers have been executed following their abduction, while the whereabouts of two others remain unknown.

In March 2018, two IOM staff lost their lives in an attack on the border town of Rann, in Borno.

Abdul was 23 when his uncle, a local leader in Damboa, was shot. “Every moment I spent with him was a fond one… He always said, live a life that will make an impact on others, so I’ve been with these words ever since.”

As a student, Abdul also suffered the impact of the conflict. “The school was closed for one full year due to security reasons, so I had to leave… You can see everyone in Borno has been affected by this one way or another.”

Some of the IDPs Abdul interacts with come from Damboa, his ancestral home. And though he has not travelled there in years, he holds dear to the memories of a time before the crisis, hoping that the pandemic too will soon pass.

“What I miss the most from Damboa is the sweet oranges (laughs). The source of livelihood there is mostly farming… I think they have one of the sweetest oranges in Nigeria.”

Like all humanitarians, Abdul has had to adapt to the new normal, convinced that his actions may have consequences for his peers, as well as for IDPs.

Every day, Abdul leaves his home only to go to work and buy groceries. “We have to take responsibility in order to save others…  I would love to spend time with my relatives and friends… I love playing football, but that is not possible during the pandemic.”

After work, Abdul hops on a keke, a yellow tricycle that hurriedly transports commuters to their homes every evening. Oftentimes, kekes are adorned with stickers, lights, and other decorations. But perhaps most noticeable are the license plates.

Nigerian plates bear the nicknames of each of the country’s 36 states, a nod to a defining trait, a unique export. ‘Centre of Excellence’ read the plates from Lagos State, the country’s commercial hub, while Nasarawa State is proclaimed the ‘Home of Solid Minerals’, and so on.

In Borno, however, the nickname ‘Home of Peace’ reads more like a promise. 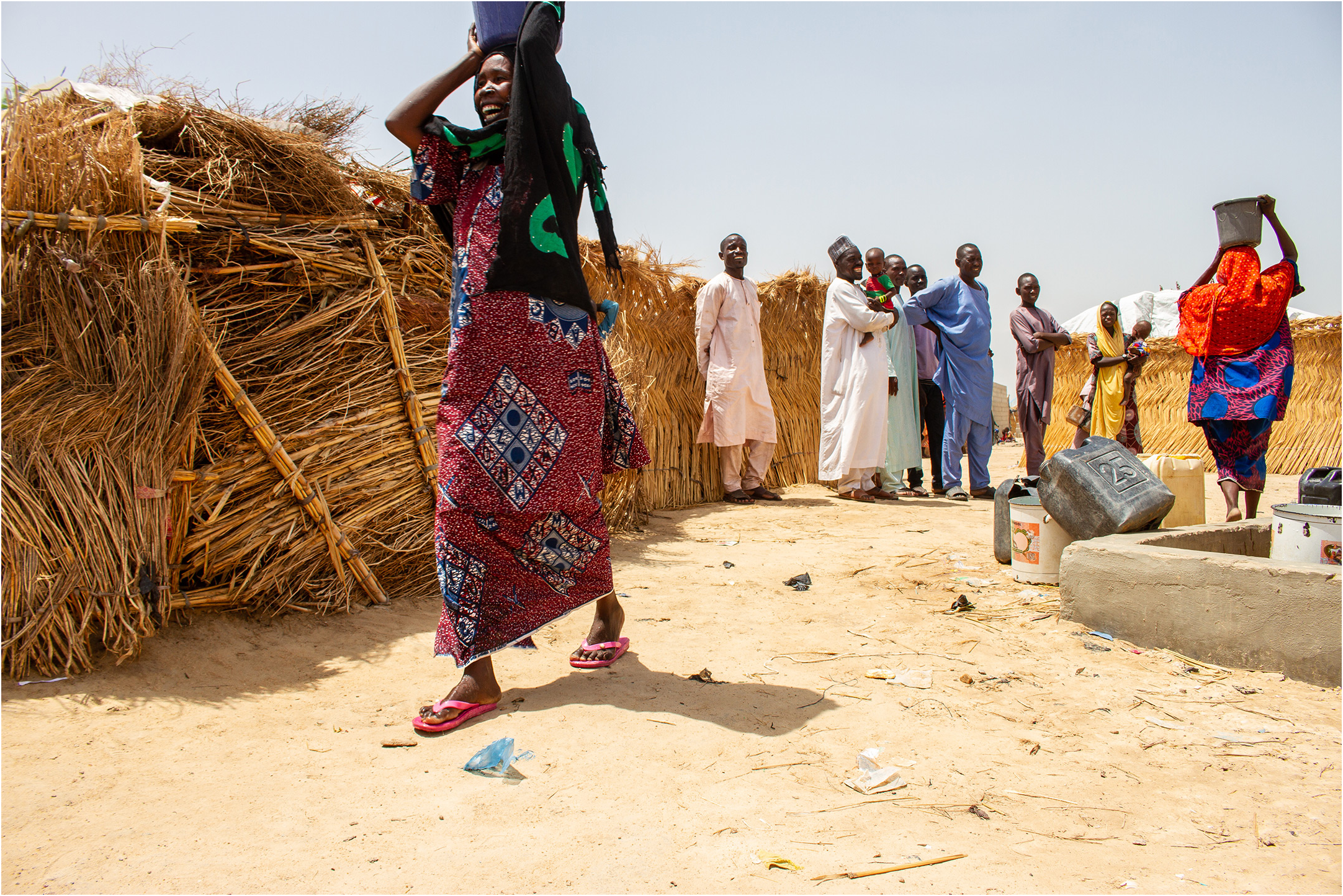 For Abdul, putting a smile on people’s faces is a motivation to continue working as a humanitarian. Photo: IOM

Across the BAY states, 10.6 million people out of a total of 13 million are in need of humanitarian assistance in 2020. This is a 49 per cent increase in the number of people in need since last year, and the highest number estimated since the beginning of the humanitarian response five years ago.

Abdul Mohammed is one of thousands of IOM staff working on the frontlines of the world’s crises.

Traditionally, every World Humanitarian Day, IOM pays tribute to the courage, dedication and determination of the real-life heroes like Abdul, who provide relief to millions of people globally.