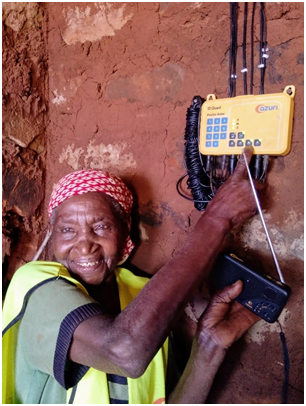 The homestead of a 75-year-old widow, Mary Syokau, a member of the Musilili Farmers’ Cooperative Society in Kenya is among the 55 others that have received a solar kit under the Climate Change Academy.

She was born at a time when communities and families solely relied on glowing embers for lighting at night.

Now in the final leg of the first implementation phase, the project which commenced in 2017 on a large scale seeks to cushion coffee farmers against the impacts of climate change through training on sustainable agricultural land management practices and income diversification.

Among its key pillars is promoting the adoption of green/clean energy among coffee farmers. This is premised on the fact that while (coffee) farmers are most affected by the impacts of climate change, they too can play a part in mitigating these effects by choosing environmentally friendly energy sources.

“We were very happy whenever there was moonlight because we would extend the nights and play outside with age mates. Life is different today. It is not safe even during the brightest moonlight. Before I got my solar kit, I used to sleep at 7 PM because I had no way of lighting my house”, Mary says as she dances to celebrate the glowing solar lights in her three-roomed house and security light outside.

Mary’s homestead is among the many that are not connected to the national grid as they cannot afford the connection and pay the monthly bills.
While she has been using a kerosene lamp, she confesses that many nights are dark especially when she doesn’t have money or someone to send for kerosene at the local shops which are 3km away.

To light up her evenings, Mary received a solar kit that contains a rechargeable battery, wiring cables with four sockets and switches, four bulbs, a solar radio and a solar torch.
As the connection is finalised, Mary requests for the solar radio to be tuned to Musyi FM and then bursts into joyous laughter.

Musyi FM is a radio station broadcasting in Mary’s local dialect – Kamba. “I will not be going to my neighbours to listen to politics and music. They will now be coming here.”

Another approach taken to promote this choice among coffee farmers is the distribution of 1,000 improved cookstoves to households.

As opposed to traditional cookstoves which essentially burn in the open air and the process lose a lot of energy leading to more use of firewood, the improved cookstove is designed in a manner that retains more heat thus requiring less fuel replenishment.

Mary Muoki, a member of Musilili Farmers’ Cooperative Society is one of the recipients of the cookstove. Previously, she used the traditional stove which she says was cumbersome and would take a long time to cook.

The traditional cookstove was a fuel guzzler”, she says. On one side of the kitchen is a pile of dry firewood which Mary says will last her several months. Previously, a similar pile would have only lasted 2 months at most.

Besides firewood, households can also use briquettes or charcoal on the improved cookstove. This has seen some households develop an inclination for briquettes which are not only cheaper (USD 0.05/Kg) but also burn longer.

This is a win for the environment as it means less reliance on wood fuel and the repurposing of organic waste such as coffee husks and pineapple waste which based on the traditional disposal methods, release greenhouse gases (methane and nitrogen) to the atmosphere during decomposition. Instead, such waste is now used to make briquettes.

Transition to renewable and cleaner sources of energy, while increasing energy efficiency is one of the most important steps humanity can take to mitigate climate change.

With collective interventions under the Climate Change Academy showing a 60% reduction in the tonnage of firewood used among target coffee farmer households, it is time to hasten our move towards environmentally friendlier sources of energy.

The Climate Change Academy is implemented with the financial support of Max Havelaar Netherlands, National Post Code Lottery (Netherlands) and in partnership with We Effect East Africa.