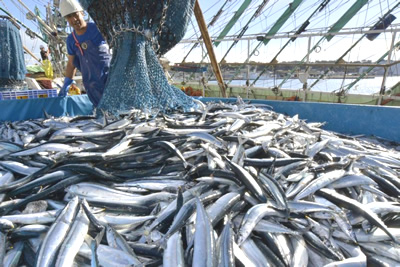 With the prospects that an improvement in global fisheries management can bring additional economic gains estimated at $83 billion, according to the World Bank, the most intense and critical issue on the World Trade Organisation’s (WTO) round of negotiations this month is, fisheries subsidies.

But, this could adversely affect one billion people in the world who depend on fish for protein every day. Experts at the first-ever UN Trade Forum in Geneva, Switzerland, on September 10, have already warned that curbing the loss of 33% of global fish stocks to overexploitation is an urgent task.

The discussions to end certain fisheries subsidies, government support schemes for the fisheries sector that allegedly contribute to illegal, unreported and unregulated (IUU) fishing, overfishing and overcapacity have been 20 years in the making and are yet to be finalised.

As WTO members try to fast-track the fisheries negotiations, time is of the essence and ambition is key. Just any deal will not do.

“Our ocean is truly our common wealth. We must protect its life and bounty to be enjoyed inclusively and sustainability for the good of all people and for the healthy symbiosis of our planet”, Scotland said.

The WTO is tasked by the United Nations as the implementing agency for Sustainable Development Goal (SDG) target 14.6, which aims to prohibit certain forms of fisheries subsidies that contribute to overcapacity and overfishing by 2020.

Governments need to successfully conclude the negotiations sooner rather than later to help deliver this key target, which affects the overall deliverability of SDG14, attendees at the forum heard.

According to the Food and Agriculture Organisation (FAO), 33% of the world’s fish resources are overfished. About 60% are fished at maximum biologically sustainable levels.

“The case for disciplining fisheries subsidies is obvious”, said Roberto Zapata, former chair of the WTO Rules Committee in charge of the fish subsidies negotiations.

However, he acknowledged that the discussions are filled not only with political sensitivities, but also with technicalities that are complex to achieve in a balanced manner.

For instance, while there is a potential “triple win” in the negotiations – to deliver benefits for trade, development and environment – there is also inherent friction between these objectives.

Also, the issue poses a challenge within the WTO’s negotiating agenda, which traditionally focuses on trade rules, but must now grapple with sustainable development, while raising technical fisheries issues that are outside the normal scope of the WTO’s trade-focused agenda.

Zapata noted that despite these difficulties, steady progress had been made in the negotiations, despite the temptation, at times, to slide back.

“They cannot afford the luxury of losing the momentum”, Zapata said, and  urged the negotiators to now accelerate the pace of discussions, mindful that the progress to date has been long and slow.

“We should not fall under the trap that any deal at a low price will suffice the purpose of sustainability. A final outcome will need to represent an actual strengthening of existing WTO rules on subsidies in the way that they have a positive effect on sustainability of oceans.”

It is estimated that 85% of governments’ fisheries subsidies go to these larger fleets, leaving the rest at risk, 2017 research in Marine Policy showed.

In addition, these subsidies can inadvertently promote IUU fishing, and overfishing.

Zapata underscored that a successful outcome would consider “ambition, sustainability, flexibility and transparency”.

“Sustainability entails a sufficient, credible level of ambition, while avoiding the WTO going too deep into fisheries management”, he said. “Flexibility would allow for priority areas for subsidization that will not undercut sustainability and development.”

“Finally, transparency and information would create a necessary balance for deference to national realities.”

He added that while the overfishing and overcapacity pillar is lagging, new ideas are being presented.

“We may think of the ocean as the last existing frontier, but it’s not. We don’t have an endless frontier. We have to create prosperity within the within limits of our planet”, said Steven Stone, chief of the resources and markets at UN Environment.

Harmful fisheries subsidies make it difficult to achieve this, he said at the forum.

Stone said an all hands-on deck approach was needed to protect life below water, saying a change in trade policies can play a decisive role in making economic activities more sustainable and ensure healthy oceans.

Climate change will lead to significant changes in the availability and trade of fish products, economically affecting countries most dependent on the sector, warned Vera Agostini deputy director of fisheries at FAO.

The stability of seafood supply is changing therefore the millions of people who make a living from the world’s oceans will need to diversify their livelihoods.

Agostini said the impacts of climate change on the fisheries and aquaculture sector will be determined by its ability to adapt. “We are at a difficult point and we have to adapt to actual climate challenges”, she said.

“While our failure to adapt can be expected to result in huge losses and high risks, adaption is not a zero-sum game. Indeed, successful adaption can result in an increase in profits”, she emphasized.

According to UNCTAD Deputy Secretary-General Isabel Durant, “Public resources need to be shifted from harmful subsidies to the constructive implementation of SDGs 14 and 13.”

To support countries in their transition to sustainable ocean economies, and to align their trade policies with overall sustainable development considerations, UNCTAD, UN Environment and FAO have crafted an inter-agency action plan.

The plan is currently the only comprehensive proposal to assist countries implement new WTO rules on fisheries subsidies and deliver on trade-related ocean targets under the 2030 Agenda for Sustainable Development.

Requiring $8.3 million to implement, the plan underscores multidisciplinary and coordinated efforts due to the complexity of multilateral rules on the law of the sea, fisheries and trade.