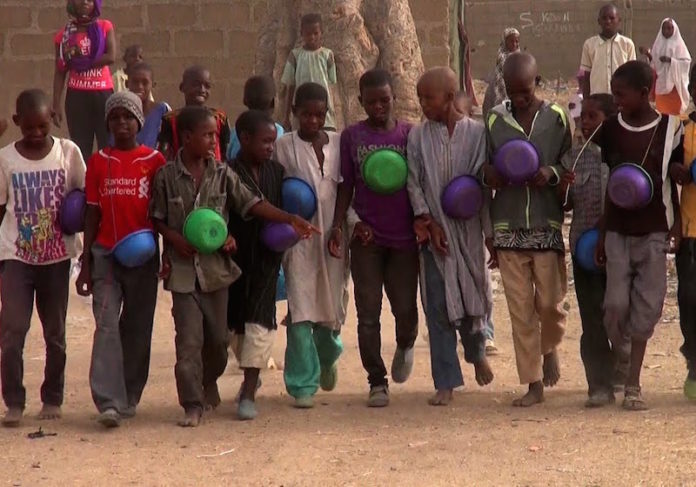 The Coronavirus pandemic has proven to be the masterstroke game-changer as the northern governors have decided, for the first time to take a decisive measure on the social menace- the Almajiri system. Hitherto, the northern establishment had only played lip service to the menace and even an outspoken traditional ruler paid the price for his stance on the system. Ironically, Gov. Abdullahi Ganduje, whose domain is most affected by the menace happens to be the first to send away 419 almajiris to their home States. VICTOR GAI writes.

According to Wikipedia, Almajiri is a system of Islamic education practised in northern Nigeria. Almajiri derives from an Arabic word, rendered “al-Muhajirun” in English literal translation, meaning a person who leaves his home in search of Islamic knowledge.

Students used to stay with their parents for the proper moral upbringing and all the schools available then were in close proximity to the immediate environment of the students. The students were funded by the community, parents, zakkah, sadaqqah.

The British colonial rule, however, led to the collapse of the once organised system and led to the current system.

“The year 1904 brought a new twist to the Almajiri system of education as the British invaded the northern part of Nigeria. During the invasion, most emirs were killed and others were deposed. The remaining emirs lost controls of their territories, this resulted also in the loss of fundamental control of the Almajiri. Boko was introduced, meaning Western education. The British abolished the state funding of Almajiri schools. With no support from the community, emirs and government, the system collapsed. The teachers and students had no financial support, so they turned to alms begging and menial jobs for survival”, so says Wikipedia.

Amazingly, a report by the National Council for the Welfare of the Destitutes(NCWD), approximated the number of current Almajiri to 7 million.

Some experts say the menace of Almajiri can be tackled through international cooperation as most of those Almajiris come from neighbouring West African countries.

According to Kabiru Inuwa in his article ‘The North and Almajiri Phenomenon’, “Indeed, with the porosity of our badly policed international borders, many of such people must have continued to find their way into Nigeria under the pretext of Islamic scholarship. And this can be attested to in most of our major commercial cities that play host to many people of different shades and characters with their corrupting influences like the Berbers, Arabs, Tuareg (buzaye), and what have you. With such a scenario in place, it will be quite difficult to completely tackle the problem without co-opting other neighbouring countries through international cooperation into taking appropriate drastic measures from their own end”.

He also opined that, apart from international support, it needs the collaboration of the 19 northern states to deal with the menace.

“I also concur very strongly with the assertions that the twin problems of almajiri phenomenon and desertification requires concerted efforts through co-operations locally among all the nineteen northern states and the FCT on the one hand, and internationally by all stakeholders in the various countries on the other, for it to achieve the desired effects. The emigrations officers should also be alive to their responsibilities in guarding our porous borders. They must also be made to understand in the concrete term that their services to the nation go beyond mere issuing of e-passports!”

But despite all these, the northern governors have remained aloof and it took the threat of the COVID-19 pandemic for them to come to terms with reality.

In her second meeting, the Northern Governor’s Forum agreed to ban the Almajiri system to protect the children from getting infected with COVID-19. They also agreed on a long term plan to phase off the practice.

Chairman of the forum, Gov. Simon Bako Lalong, disclosed the plans the forum had on the Almajiri system.

According to Lalong’s Director of Press and Public Affairs, Macham Makut, apart from the decision to ban inter-state travels, the governors also discussed the menace of the Almajiris.

“The governors also discussed the risk that Almajiri children are exposed due to the virus and they unanimously decided to ban the Almajiri system and evacuate the children to their parents or states of origin.

“They vowed never to allow the system to persist any longer because of the social challenges associated with it including the perpetuation of poverty, illiteracy, insecurity and social disorder.”