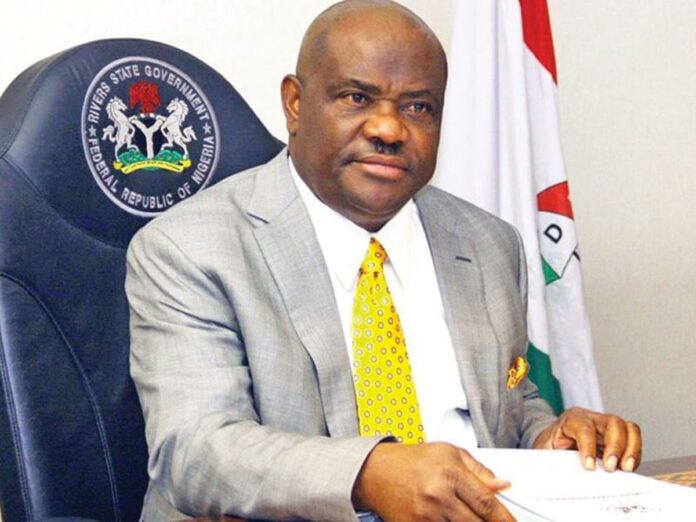 In a deft political masterstroke, Governor Nyesom Wike of Rivers State took a well-measured aim at the Niger Delta Development Commission (NDDC) Management, Ijaw youths, and Abuja contractors, and shattered the ego of the three forces.

To the NDDC management, the governor dropped his killer weapon, ‘’trillions of naira have been spent, and we cannot say this is what we have spent the money on’’, and in a tactical point blank on Ijaw youths, he said, ‘’some ethnic groups in the Niger Delta are behaving as if they own NDDC.’’

Governor Wike took advantage of playing host to the Interim Management Committee of NDDC who were at Government House, Port Harcourt on Tuesday for a courtesy visit to unleash his venom on those impeding tangible development in the vastly polluted oil and gas region.According to him, people are abusing the entire oil region because NDDC has wasted trillions of naira without lifting the masses of the region out of poverty or commensurate developmental projects on ground to show for the funds received.“The problem with us is that you allow people outside to control you.  You want to have godfathers from East, West and North. NDDC is created for Niger Delta. Use the money for the people and region.

“Those Abuja portfolio contractors are part of the people controlling you. They tell you what to do and you do it for fear that they will remove you. But eventually, you will be removed. So, why not work for the people. When you’re removed, you’ll know you did your best for the region”, he said.

Continuing, the outspoken governor says the commission belongs to all oil-producing states and as such, ‘’no one particular ethnic group can assert itself as the dominant owner of the commission as has been observed of recent.

‘’Members of those groups always kick against the appointment of people to head the commission because they feel such persons are not from core Niger Delta states. This must stop.“Anybody can be appointed in Niger Delta. There are people who believe that if they appoint somebody from Edo or Cross River states for example, they say no. That those people are not the core Niger Delta states. We must have to stop that”, Governor Wike said.He said such people also leave their states and come to Rivers to block the gates of the commission, cause crisis and frustrate economic activities, insisting, ‘’NDDC does not belong to any ethnic group in the Niger Delta.

‘’It does not belong to anybody. There are people who have seen themselves that they are the owners of NDDC. They leave their state and come to Port Harcourt to block NDDC gate .We are peaceful people, but nobody should push us to the point where we can tell you enough is enough.

“The next time they try it again to cause crisis in our state, I’ll mobilise our people against them. I am not saying if you have grievance with NDDC you shouldn’t seek how to settle it. But don’t use it to cause problem for us, to begin to make economic activities not to move on.”

Wike then challenged the new interim leadership of the commission to be determined to make a difference, change the current narrative of the commission serving outsiders interest and abandoning it’s core mandate of developing the region.

He also charged the interim management to always work with all the state governors in the region on equal footing, and without politics so that together, they can achieve desired development.“Go and visit every governor because they are members of the Governing Council of NDDC and they are the leaders of their states. You don’t need to entangle yourself with unnecessary bickering, politicking. Show a difference.”

Wike however, cautioned the NDDC management to obey a subsisting court order that makes mandatory for the commission to seek the consent of the state government before embarking on any project, particularly in Rivers.

“I will not hesitate to tell the Attorney General to file contempt against officials of NDDC and NDDC  itself. We will not hesitate. Because we have come to the time that Nigerians must understand we must follow rules.

‘’The only way you can talk about good governance is when you obey the rule of law. There cannot be good governance when there is nothing to show you obey the law. Good governance is predicated on the rule of law.”He urged them to conceptualise regional project for execution to end the piecemeal partner they had adopted, which has not moved the region forward in terms of infrastructural development.“I’ve always said to people, when you have the opportunity to make contribution to the development of your fathers land, you must see it as blessing God has given you. You must not see it as a way to set back your region.Governor Wike also urged NDDC to send their partnership support towards the reconstruction of the ongoing dualisation of Eastern By-Pass Road where the NDDC permanent headquarters is located.He told them to put their temporary office along Aba Road in good condition before moving out to their permanent headquarters office.Earlier, NDDC’s Interim Administrator and Chief Executive Officer, Effiong  Akwa, said the visit was first to be undertaken by his team to any governor in the region, informing his host that with the commission’s head office now completed, they are ready to commission it on February 25, 2021.On behalf of the commission, Akwa later presented six waste disposal trucks to the Rivers State Government to improve the sanitary conditions in the state.Governor Wike noted that this is the first time in his administration that the commission was offering support to the state government.He commended them for demonstrating good corporate social responsibility in encouraging the state government in its drive to restore Port Harcourt to its Garden City status.