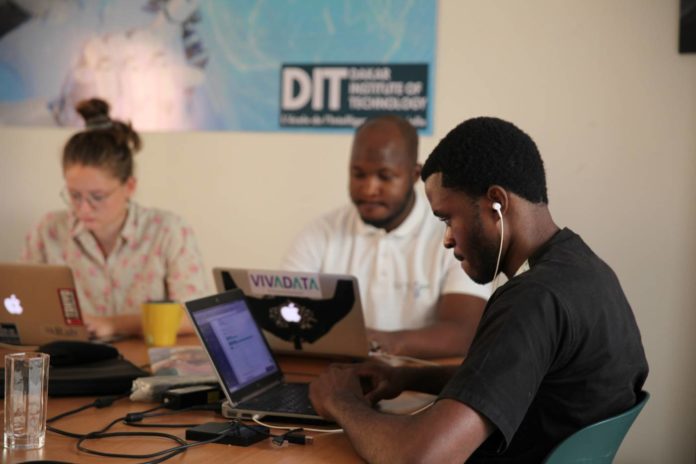 He is part of an inaugural batch of students at a new AI programming school in Senegal, one of the first in West Africa.

Its mission is to train local people in using data to solve pressing issues like the impact of climate change on crops.

The Dakar Institute of Technology (DIT), which opened in September, is running its first 10-week boot camp with nine students in partnership with French AI school VIVADATA.

“I am convinced that by analyzing data we can give (farmers) better solutions,” said Sonzahi, 30.

He plans to bring his AI skills to Ivorian startup ATA Solution, which advises farmers on how to maximize scarce resources like land and water.

The company already collects data such as soil PH, temperature and moisture levels, said Sonzahi, who works with the startup as an analyst.

With AI, that data could be processed to show exactly when and where farmers should add water or fertilizer, and help strengthen their understanding of crop losses, he said.

Data scientists across the continent are beginning to experiment with machine learning as a tool to help farmers cope with increasingly erratic weather, from modeling the fastest route to market, to detecting problems in fields with drones.

In Cameroon, a new mobile phone app called Agrix Tech allows farmers to photograph a leaf affected by blight and then, using AI, diagnoses the problem and recommends treatment.

A project launched in Kenya this year also uses AI to crunch big data and give smallholder farmers recommendations such as when to plant, in a bid to avert food shortages, according to French technology firm Capgemini.

But knowledge of AI and training opportunities are slim, especially in West Africa where fixes for crop failure are sorely needed, said DIT director Nicolas Poussielgue.

West African countries are among those hardest-hit by climate change, according to scientists, with populations that depend largely on agriculture losing their livelihoods due to worsening floods and droughts.

“For models of climate change, the basic calculations use physics. Now you can add AI, which lets you have better results to know what is going to happen and where,” said Poussielgue.

DIT plans to launch a bachelor’s degree in big data and a master’s in AI in 2020, each with 25 students, he added.

Not all the boot-camp participants are focused on agriculture, but it is one of the key areas in which AI has the potential to make a difference in West Africa, besides health and education, he said.

“The idea of the school is to have students who will create their own startups and products,” said Poussielgue.